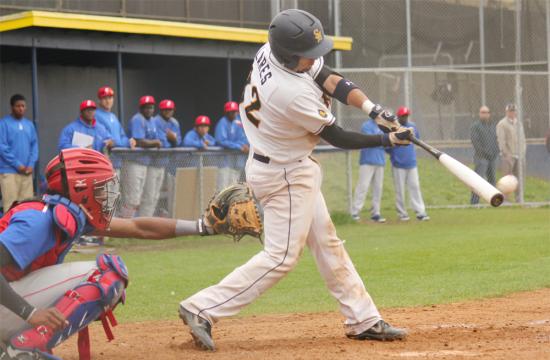 With the game tied 3-3 against Serra (8-3) Samohi (5-4) starter Conner Greene took the mound having already thrown 100 pitches, but it turned out to be the worst mistake the Vikings made against the Cavaliers at home Tuesday afternoon.

The Cavaliers were able to scratch across runs in both the fifth and six innings after being shutout by Greene proving that they were getting a grasp on him.

The Cavaliers looked to regain the lead in the seventh.

It looked like an easy inning for Greene with the bottom of the line-up at bat in the seventh inning, but after a leadoff single and a perfect bunt put runners on the corners and tested Greene’s mental toughness.

Cavaliers first baseman Isaiah Flowers worked the count full and stroked a single to center to bring in the winning runs giving Serra a 5-3 lead. It was the third consecutive single given up by Greene and would end his night proving to be the dagger for the Vikings.

“Every pitch matters so I approached those guys the same way I did (Smith),” said Greene. “But I was getting tired mentally, so I made a mistake leaving the ball up in the zone and it cost me.”

Another run scored on a passed ball, and the Vikings lost by score of 6-3.

“This game will definitely give confidence to our guys,” said Santa Monica head coach Kurt Schwengel. “To hang around a team like Serra and get good at bats against Smith, it will help us later down the line in league games.”

Greene was charged with the loss, as he allowed five of the six runs in six innings while striking out eight Cavaliers.

On the other side, Serra star pitcher Dominic Smith set his dominance early against the Vikings, punching out six batters through the first three frames but not Vikings batter Ryan Barbarin.

Barbarin thrived facing his old school and was very productive out of the nine hole drawing two walks with two RBI’s.

“It was great to see Ryan come out and do what he did,” said Schwengel. “He was a little more amped up for this game than most and you could tell.”

Earlier in the fourth inning, Samohi had finally found a way to get to the ace.

A leadoff single by Nobu Suzuki got things rolling for the Vikings. But Smith quickly responded with back-to-back strikeouts until a single by Jonathan Rakulijic put catcher Lino Lares at the plate with two on and two out.

Lares didn’t waste any time and flared the 0-1 pitch over the shortstop’s head scoring Suzuki and rattling Smith in the process.

Smith walked consecutive batters to force in another run and give the Vikings a 2-0 lead heading in the fifth inning.

Smith got one of those runs back in the sixth inning and doubled in a run that would tie the game at 2-2. Smith collected two hits and an RBI, while striking out nine Vikings in five innings of work for Serra.

Samohi will start a two-week road trip with their first game against Centennial (6-2) on Saturday at 11 a.m.