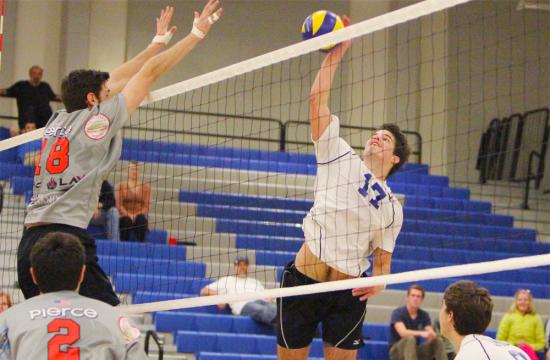 The third set was tied after outside hitter Zach Brown of Santa Monica College (3-5) evened the score against LA Pierce 29-29 with the Corsairs looking for their first Conference win of the season over the LA Pierce Brahmas (3-4) at home Friday night.

But the Corsairs were stopped short of the victory after four sets 3-1 by LA Pierce setter Tyler Yanez who managed to place in a point after a long volley to put the Brahmas ahead 30-29.

SMC Volleyball Head Coach John Meyer said that he thought that the Corsairs needed to grow in order to win more volleyball games.

“In hindsight clearly the third set was a big one but we knew anytime you are split 1-1 that third set gives you a big advantage,” said Meyer.  “The way we lost was tough.  In the third set there was a swing in the net and the ball did some crazy dig, hit the net, rolled over and that hurt, but a good team would have responded and been ready to play the fourth.”

LA Pierce Volleyball Head Coach Lance Walker said that the win was “huge” for the Brahmas.

“For us to win tonight on the road against SMC, a huge rival for us, is really nice and a good confidence builder for our Brahmas who came in here and played really hard,” said Walker.  “I think the game really came down to one play and that was when Corey Pitt served the ball in.  He got this amazing defensive dig that went over the net and it was a momentum changer for us.  After that, we didn’t look back.”