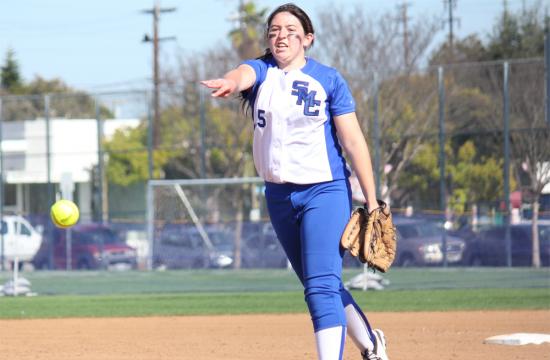 Santa Monica College (2-16) lost a doubleheader against LA Mission College (14-8) but not before nearly upsetting the Eagles in the first game of the doubleheader 7-5, and then losing a high scoring eight-inning game 16-12 at John Adams Middle School field Thursday afternoon.

LA Mission Head Coach Sandra Durazo said that the Eagles played a tough first game against the Corsairs with the Eagles Monique Guzman slapping a home run to keep the Eagles in first place in the Western State South Conference.

“I think we started a little bit slow,” said Durazo.  “Santa Monica did a good job defensively to keep us where we are at.  We got that three run bomb late in the game but we hung in there and came through with the win.”

Santa Monica College Softball Head Coach Stephanie Spychaj said that the 2013 season has been difficult after losing their number one pitcher Devyn Souza early in the season.

“Our number one pitcher fractured her wrist the fourth game in,” said Spychaj.  “We had two other pitchers come in and work hard but we struggled without a full pitching staff.”

Souza came in as a reliever for starter Chaquita Burns in her first game since she was injured earlier in the season.

“This is her first game back since she’s been hurt so I can’t expect her to be perfect,” said Spychaj. “But she did what she needed to do and you can’t defend against home runs but the rest of the team came back and tried to fight for those runs.”

With the score tied up at 4-4 in the bottom of the seventh inning, LA Mission’s Guzman hit a homer to left field sending in three Eagles to make the score 7-4.

The Corsairs attempted a comeback in the top of the seventh inning with Lizeth Lopez hitting a home run of her own to make the game 7-5 but the Eagles held on for the win.

In the second game of the doubleheader, the Eagles won a high scoring eight-inning game 16-12.

Regardless of the loss, Spychaj still has faith in the Corsairs.

“We got a good squad with a lot of freshmen who are seeing a lot of playing time,” said Spychaj.