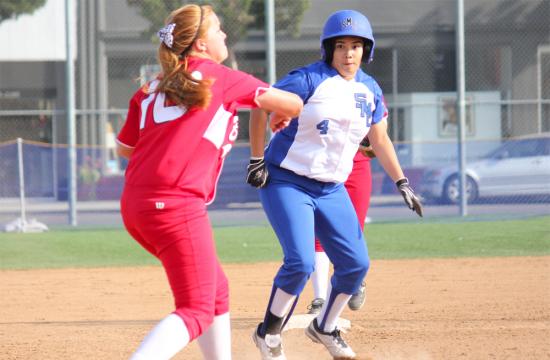 With the loss the Corsairs are now 0-9 in the Western State Conference.

Bakersfield Softball Head Coach Sandi Taylor said that she thought that the Renegades played well against the Corsairs.

“For us it was a good day at the plate,” said Taylor.  “We had been struggling but today we scored a lot of runs.”

SMC came out with confidence taking the lead early in the first inning with Corsairs pitcher Devyn Souza refusing to allow any runs in the first three innings.

But the Corsairs fortunes shifted dramatically in the bottom of the fourth inning after Souza walked two batters to load up the bases for Bakersfield infielder Kassidi Ward.  Ward hit a grand slam to give the Renegades the lead and make the game 4-1.

The Renegades Kylee Rice continued the fourth inning onslaught off of an error at second rounding the bases to make the game 5-1.

Corsairs relief pitcher S Burns took over for Souza but was overwhelmed by the confidence shown by the Renegades and gave up seven runs in the final three innings.

“It was just a good team effort,” said Taylor.

SMC mounted a late run with Jasmine Rodriguez slapping a home run of her own in the seventh inning while Cynthia Gamez made it home off a hit by Paola Cabrera, but the game was already out of reach for the Corsairs.

“I thought the game could have gone either way,” said Taylor.  “Santa Monica has been just like us, up and down.”