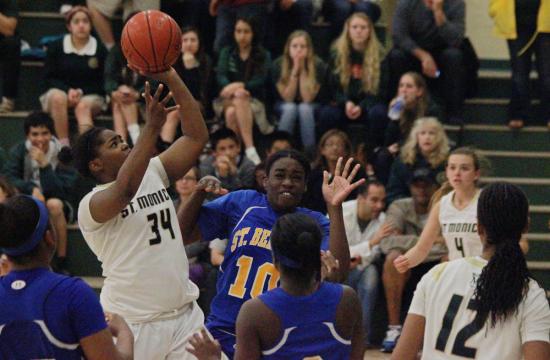 St. Monica (28-7) was defeated by St. Bernard (28-8) in the CIF California State Girls Basketball Playoffs 75-51 with the Vikings gaining control of the game from the opening tip-off until the last basket at home Tuesday night.

St. Monica all-league forward Melissa Maragnes and all-conference guard Briana Harris got into foul trouble early in the game limiting their playing time in the first half.

Harris scored 25 points before fouling out mid-way through the third quarter and the Mariners cut the lead to 14 (after ballooning to 27) before she fouled out and this played a large factor in the Mariners loss to the Vikings.

St. Monica Basketball Head Coach John Skinner said that the game could have been called better.

“Hats off to St. Bernard’s for winning the game and they are a better team but better communication and control from the refs would have led to a much better game for all involved,” said Skinner.

In total, St. Monica racked up 26 fouls to only eight for St. Bernard’s in the first half four main contributors had four fouls to start the second half.

Early in the first quarter, Vikings guard Cydney Bolton nailed a three-point shot to put the Vikings up 3-0.  The Vikings extended their lead to 7-0 before the Mariners responded.

Harris nailed a three to launch a St. Monica comeback to make the game 7-3 with the Mariners able to extend the run and tie the game at 7-7 with 4:33 left in the first quarter.

St. Bernard’s Chanelle Pelle hit a basket that put the Vikings up 9-7 before Harris hit another big three-point shot to give the Mariners their only lead of the game at 10-9.

St. Monica never recovered and without the consistent play of their two star players, Maragnes and Harris, the Mariners lost the game to St. Bernard 75-51 to end a memorable 2012-2013 season that saw St. Monica capture a CIF SS Girls Basketball crown.

“I was really proud of how the kids recomposed themselves after a brutal second quarter and finished the game strong,” said Skinner “It was a tremendous season that all involved will never forget and I am very proud to say I coached this group of young ladies and I can’t say enough about how great a job my assistants did this year.”