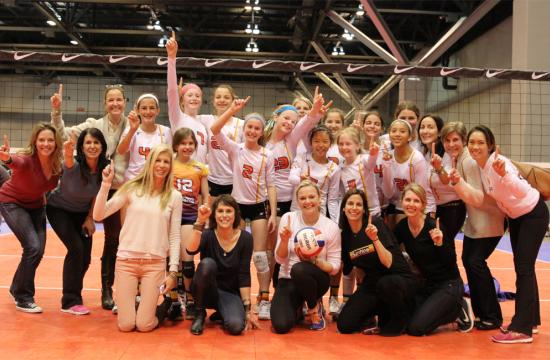 “The girls played well but it wasn’t until the matches were on the line of not being able to qualify that they exceeded my expectations,” said Jamrichova.  “Every player stepped up and played with heart. When my top players started to struggle, their teammates picked up the slack and let them know that we are a team and we will lose and win as one.”

On day one, the Sunshine 12 Westside team got off to a strong start going 3-0 even in the face of fierce competition, but on day two the girls found themselves facing a “pool of death” after losing their first match to the Asics Mavs 12 Blue 2-1 with set scores 25-16, 19-25, and 15-7.

Yet that didn’t hamper their play the rest of the day.

The Sunshine 12 Westside girls team proved themselves to be champions worthy of further competition beating first the Excel 12 National Shea 2-1 with set scores of 25-16, 22-25, and 15-8 before facing-for the second time in the tournament-the Circle City Nike Elite 12 defeating them soundly 2-0 with set scores of 25-15 and 25-23.

“In the championship match I saw a player who is good become extraordinary,” said Jamrichova.  “The MidEast Qualifier is one of the hardest qualifiers to win and doing so it shows that we are in the running for a medal at Junior Nationals.”

Jamrichova said that she believes the girls will have to get better and improve even though they won the MidEast Qualifier if their goal is to win medals on the national stage.

“We will need our bench players as well as our starters to be able to play at a higher level of competition from day one,” said Jamrichova. “Junior Nationals is the best 48 teams from US and Puerto Rico and to do well you cannot have an off day.  We have four regional tournaments to get our team to become the best of the best but it will take hard work from every player and from me as well to get there.”

Next qualifying tournament for the Sunshine 12 Westside girls team is at the Anaheim Convention Center April 19-21 with the time TBA.