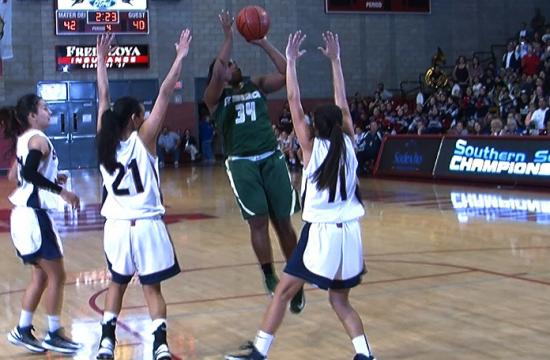 It was the third time St. Monica (29-6) had played St. Paul (19-13) in the 2012-2013 girls basketball season, but this time the Mariners overcame the Swordsmen 46-45 in the CIF Southern Section Finals at Mater Dei High School Saturday Night.

St. Monica Girls Basketball Head Coach John Skinner said that he was impressed at how the coaching staff stuck together and stayed calm even after trailing by 17 points.

“I am really proud of how the team and coaching staff stuck together and stayed calm after a brutal first half in which we fell behind by 17 points,” said Skinner.

Skinner said that these previous two games had helped the Mariners in the finals against the Swordsmen.

“We were able to draw on previous experiences earlier this year where we fell behind and fought back,” said Skinner.  “The kids always believed this was destiny for them.”

Since last year’s quarterfinals loss to Brentwood, the focus for St. Monica has been to improve in the playoffs and possibly capture St. Monica’s first girl’s basketball CIF championship, yet the Mariners needed to go through the Swordsmen for a third time this season to attain the title.

In the first half, Mariners first team All-CIF guard Briana Harris struggled and scored only two points as the Swordsmen shut her down, but she came back strong in the second half.

“After struggling in the first half and just trying too hard to make things happen, Briana slowed down and let the game come to her in the second half,” said Skinner.  “She played at a level above everyone else on the court.”

Harris scored 21 points in the second half to add to her total of 23 points and 13 rebounds in the game.

Skinner said that he thought that freshman Gloria Scipioni played a solid game against the Swordsmen.

“I can’t say enough about Gloria Scipioni’s performance as a freshman on such a big stage,” said Skinner. “She made some huge defensive stops in the fourth quarter and only had two turnovers facing constant pressure throughout the game.”

“Melissa struggled offensively but her presence defensively and rebounding was a key,” said Skinner.  “She was also a tremendous leader who never gave up despite the team’s poor first half showing.”

Skinner said that he thinks that the Swordsmen are a great team and believes the Mariners got lucky at the right time to win the game.

“St. Paul is a great team and very well coached,” said Skinner. “They ran circles around us in the first half and had a great game plan.  Fortunately we were able to get things going in the second half and momentum swung our direction at the perfect time.”

The St. Monica Girls Basketball team has a bye in the first round of the CIF State Playoffs this week with their next game in Round 2 Saturday at home at 7 p.m.