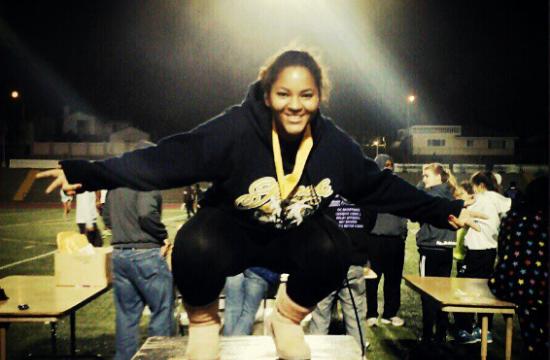 The Wendy’s Heisman award is presented each year by Wendy’s to outstanding student / athletes in respect to grades, community service, and of course, outstanding athletic achievement.

Overton is a double-letter varsity member on Samohi’s soccer team as well as the track and field’s shot put and discus team.

As the Samohi goalkeeper, she ended this soccer season with two “Player of the Game” honors.

The first came in their win against Beverly Hills on Samohi’s Senior Day where she had 11 saves and 0 goals against in 40 minutes of play.

Her second POG honor came in their first round CIF game against Colony High that went into double overtime and penalty kicks after playing 100 minutes in the goal, 18 saves and 0 goals-against.

Although Samohi lost the game, Overton had 80 minutes with18 saves and won the Game MVP Award.

As a goalkeeper for the South Bay All Star Team, she will be competing this Friday, March 5 at El Camino College at 5:30 pm. The boys Senior All Star game will follow immediately at 7:30 pm.

The 2012 Girls Varsity Track Team, which included the throwing team, won the 2012 Ocean League Team Champions title for the first time in ten years for Samohi. They are looking to retain their title in 2013.

As an honor student excelling in U.S. and World History, Zaire was inducted into the 2013 United States Achievement Academy as a winner of their National Social Studies Award. She was also presented with the 2012 SMMUSD Outstanding Leadership Award for her work as a facilitator in the Samohi 2nd Annual Black Forum.

Her dedication to community service with the Santa Monica Chapter of the American Red Cross and the African American Mentors Society earned her, for the second time, the President Barack Obama Council on Service and Civic Participation Award where she received a letter from President Obama along with an Honor Pin; as well as the United States Freedom Corps Volunteer Award and the American Red Cross Youth Service Award.

On Feb. 22, 2013, Overton was honored at the Santa Monica Elks Foundation Annual Youth Awards Dinner held at the Elks Lodge as the recipient of Santa Monica’s 1st Place Award in the Elks Most Valuable Student Scholarship Award.

She plans to attend a four-year college program and is yet undecided. She is the youngest daughter of Jayne Kennedy Overton and Bill Overton. She has three sisters: Cheyenne, Savannah, and Kopper.