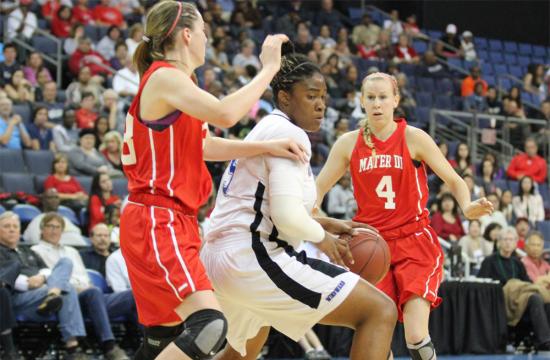 Windward (32-0) defeated Mater Dei (30-2) 81-71 outscoring the Monarchs in the second quarter to win the game in the California Regional Championships at the Citizens Business Bank Arena in Ontario Saturday night.

With the win, the Wildcats advance to the 2013 California State Finals game.

Windward’s point run began in the second quarter when the Wildcat’s Emily Surloff hit a long jumper to give the Wildcats a six point lead at 30-24.

Mater Dei narrowed the lead to four points at 30-26 before Surloff hit another basket to make the game 32-26.

The Wildcats extended their lead to 41-31 off of a layup by Jordin Canada.

Mater Dei was never able to regain the lead after this second quarter run and lost the game.

On defense, Simon had 17 rebounds to give her a double-double for the night along with Jordin Canada who had 14 assists.

Next game for Windward is against Bishop O’Dowd (29-3) for the California State Championship at the Sacramento Sleep Train Arena Friday at 6 p.m.

For more information on how to get tickets to the game visit www.sleeptrainarena.com