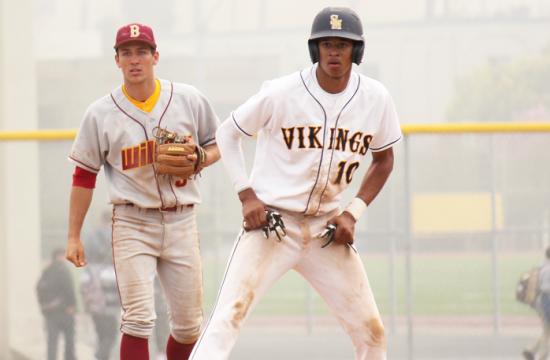 The Santa Monica Vikings (4-3) have won all three home games of the season and were looking to get exactly that with their dominant pitching aces Connor Greene and Alex Gironda who took the mound in a doubleheader against Long Beach Woodrow Wilson (5-4) Tuesday afternoon.

In what turned out to be an extra-inning game, Greene provided that dominant pitching against a potent Bruins offense for the first seven innings of game one.

But when a pitching change to reliever Andrew Brown occurred in the eighth, Woodrow Wilson made sure to take full advantage. Shortstop Tim Richards did just that by drawing a walk to lead off the top of the eighth inning.

Clean-up hitter Sean Williams then crushed a triple into the gap, scoring Richards to put the Bruins up 1-0. Tacking on another run on a perfectly executed squeeze play, Woodrow Wilson would hold off the Vikings for the 2-1 victory.

“We just didn’t execute when we needed to, and that cost us later in the game,” said Santa Monica head coach Kurt Schwengel.

That lack of execution cost the Vikings on offense, as they themselves were held scoreless for the first seven innings of the game. That put pressure on Samohi starter Greene to keep the Bruins off the scoreboard. Despite a shaky first couple innings, Greene was able to settle in and allow his defense to make plays behind him.

“I always give myself some room to warm-up in the first inning, so by the second I’m fueled up and ready to go,” said Greene. “My curveball was effective enough that it allowed me to keep those guys off balance.”

Greene would hold the Bruins to four hits over seven shutout innings, while striking out seven batters.

Woodrow Wilson starting pitcher Josh Goldberg matched his counterpart, as he stifled the Vikings offense for six strong innings. Goldberg did walk five batters, but only gave up three hits while striking out nine.

Relief pitcher Cesar Gomez completed the final two innings for the Bruins and earned the win.

As the second game started, noticeable changes to the line-up were made by the Vikings in an effort to give some rest to core players. This was a key component in the early meltdown by Samohi starter Alex Gironda.

Keeping their regular line-up in tack, Woodrow Wilson pounced on Gironda in the first inning for four runs and put a stranglehold on the game from the first batter on. Issuing four first inning walks, coupled with two fielding errors led to the unraveling of Gironda in game two.

“We put ourselves in a hole early, and it was a going to take a tremendous effort from our guys to get back into the game,” said Schwengel.

Gironda failed to provide that strong pitching the Vikings were accustomed to getting from him, as he only lasted three innings and allowed four runs.

By the end of the fourth inning, the Bruins held a comfortable 7-0 lead that was highlighted by a towering home run to right field by slugger Chris Betts off relief pitcher Eli Bieber.

Woodrow Wilson would go on and win the game 11-0, sweeping the doubleheader and putting an end to Samohi’s three game winning streak.

Samohi will look to bounce back at home against T.B.A. Saturday at 11 a.m.