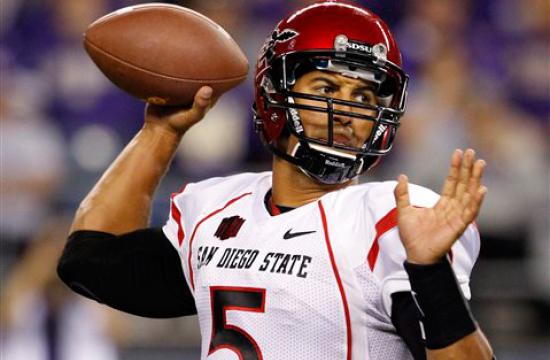 Former Santa Monica High School quarterback Ryan Katz signed with the Denver Broncos as a free agent in the NFL draft on a three-year contract Saturday afternoon after blossoming into a star quarterback at San Diego State during the 2012 college football season.

Katz said that he got a call on Saturday from Denver in the fifth round of the NFL draft and was asked to be one of the 15 undrafted free agents of the 23 players chosen by the Broncos in the NFL draft.

“Just leading up to it, I had about ten teams that had showed interest in me including the Broncos after pro day,” said Katz. “They told me they had one more pick in the seventh round and were very interested in wanting me to play for them.”

Katz will don the navy blue, orange, and white jersey to join the mile-high team come fall and will compete against 2013 seventh round draft choice Zac Dysert of Miami and Brock Osweiler to back up Peyton Manning at quarterback for the Broncos.

“I had a couple other offers but thought that this was the best deal for me, so I decided to go for it,” said Katz. “It has been my lifelong dream to play in the NFL.”

Katz threw 99 completions in 163 attempts for 1348 yards and 13 touchdowns in seven games with San Diego State in 2012 leading the Aztecs to a 5-2 record before breaking his ankle in the first quarter against Nevada.

But Katz recovered from his injury four months later- even though the doctor had told him that he would recover in six- and said that he was currently preparing for his upcoming career as a pro football player.

“I have never had a lower leg injury before but I am healthy and feel good now,” said Katz. “It was just one of those things and it was a tough time. I couldn’t play the rest of my senior year and I had to watch from the sidelines, but I knew I wasn’t done with football.”

After being benched the rest of the season during the first quarter of the eighth game against Nevada, the ankle injury only motivated Katz to get up again and become healthy so that he could have a shot at the NFL.

“I was really motivated to play again,” said Katz. “I spent long days with early mornings until I recovered and I am 100 percent now.  I am working on my lower body to get it back into the shape I like to be in.”

Katz grew up in Santa Monica playing on Pop-Warner teams and was part of the little league baseball teams that held games at Memorial Park prior to playing for the Samohi Vikings under then head football coach Zach Cuda from 2006-2008.

“I take pride in being from Santa Monica,” said Katz. “Throughout my whole career from Samohi to the colleges, there have been a lot of people who have supported me and gave me the encouragement I needed. It makes me proud of my city.”

Prior to transferring to San Diego State, Katz was with Oregon State for three years but a wrist injury sidelined Katz, and when he was healthy to return to the starting line-up of Oregon State again the Beavers decided to “move in a new direction.”

This new direction without Katz may have caused the Beavers to stumble as they went 3-9 for the 2011 football season resulting in Katz’s decision to use  his final year of football eligibility at San Diego State after graduating from Oregon State.

“I transferred to San Diego State as a senior just coming out of Oregon State and took a chance on a brand new program not knowing what the future would hold,” said Katz.

And even though Katz may not realize it yet, apparent setbacks only seem to make Katz stronger.

“You ask yourself ‘why me?'” said Katz. “But at the end of the day, this is when the real work begins and I told myself that I was going to get over this and give the NFL a shot.”

Now that Katz has his shot to play in the NFL, odds are this native Santa Monican will make the most of his experience in the pros.

Katz is part of the 15 free agents that will add depth to the 2013 NFL draft class for the Denver Broncos which includes DT Sylvester Williams of North Carolina, RB Montee Ball of Wisconsin, CB Kayvon Webster of South Florida, DE Quanterus Smith of Kentucky, and Dysert of Miami.