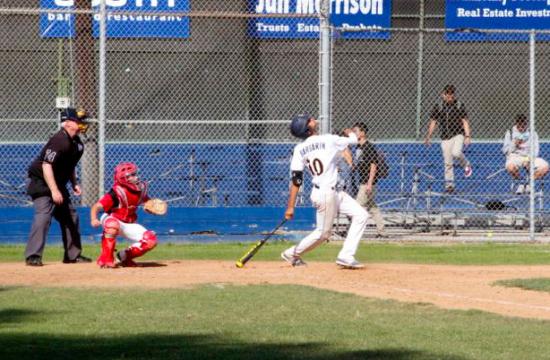 It was a close game in the bottom of the seventh inning and Santa Monica High School’s (14-9) pitching ace Connor Greene was determined to put away the batters of cross-town rival Palisades Charter High School (6-14) in what had become a closely contested game to the very last out.

Greene looked to complete his first full game of the season with a win but the heart of the Dolphins line-up stepped up to the plate and challenged the Vikings surmounting a comeback and cutting into the Vikings three-run lead.

“Today I did my best to compete and just keep my team in the game,” said Greene. “My curve ball was trash today and those guys came out ready to swing the bats. You could tell they really wanted to beat us, but so did we.”

Greene got the first out on one pitch to start the seventh, but the Dolphins struck back connecting with multiple base hits that included a single and a double that cut the Vikings lead to 5-4.

With two outs and no runners on base, Greene fought back to get the final out by striking out Dolphins shortstop Joshua Holmes to give Samohi a 5-4 victory over Pally.

“They played some really good defense today and that kept a couple runs off the board for us,” said Samohi coach Kurt Schwengel. “But we played our best defense of the season as well and that helped us get out of some key situations.”

From the first batter in the first inning of the game, Greene struggled to lead the Vikings giving up a lead-off single as an aggressive Dolphins team came out swinging and connecting with the baseball.

Greene was able to record the next two outs in the first inning before getting himself into trouble.

The Dolphins Joey Dills crushed a fastball off a 2-1 count that doubled down the left field line to bring in Palisades first run of the game.

Another double in the inning by Holmes brought in the second run for Pally and gave the Dolphins a 2-0 lead at the end of the first inning.

The Vikings had to go back to their style of play, small ball, as they looked to get their first runs of the game.

Jonathan Rakuljic cracked a lead off double in the bottom of the third, and Vikings catcher Lino Lares dropped down a bunt that put the Vikings runners on first and third.

Samohi’s Ryan Barbarin took advantage of this opportunity by hitting a sacrifice fly to right field to drive in the Vikings first run of the game. A single later in the inning by Samohi first baseman Eric Gomez brought in the fourth run of the inning, giving the Vikings a 4-2 lead after three innings of play.

Three double plays by Pally would limit the Vikings to just one more run over the last three innings but the final run proved to be the deciding factor in the game.

Greene finished the day going a complete seven innings and earning his third win at home by scattering eight hits, walking three, and striking out seven Dolphins while being charged with four runs.

The Vikings won at home against Morningside (1-8, 0-4) 15-0 Tuesday with pitcher Danny Galvan taking the mound.

Galvan has yet to allow a run or hit in four innings pitched at home this season and had six strikeouts in three relief appearances prior to the game.

The Vikings won a rematch away against Morningside 18-0 Thursday afternoon.