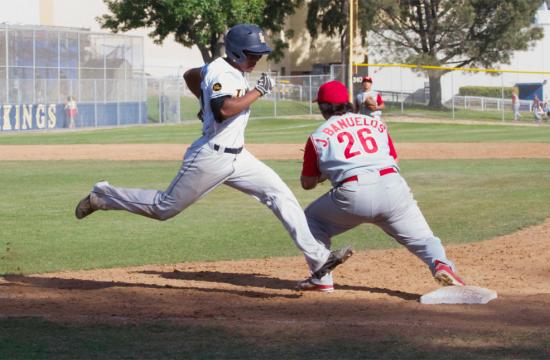 The Santa Monica Vikings (11-9, 2-0) played host to the Hawthorne Cougars (11-6, 0-2) in the second of two games between the clubs following a 4-1 victory Tuesday at Hawthorne before winning at home Thursday afternoon 5-1 to open up league play.

Samohi Baseball head coach Kurt Schwengel said the bottom of the Vikings line-up played well against the Cougars and strongly contributed to the win.

“We had a lot of production from the bottom part of our line-up today,” said Schwengel. “Jonathan (Rakuljic) and Freddie (Norris) had big hits for us, we are used to getting that from the top of the line-up so it was nice to get it from those guys.”

Both teams were held scoreless until the bottom of the third inning when the Vikings got themselves in scoring position with Alex Turner stealing both second and third base after being hit by a pitch and walked to first.

This gave teammate Lino Lares the perfect opportunity to drive in the first run of the game.

With the count in his favor 3-1, Lares dropped down a solid bunt that brought in Turner, and gained his second bunt single of the game.

The 1-0 lead would be short lived though, as a lead off walk issued by Samohi pitcher Connor Greene would come around to score on an error in the top of the fourth inning tying the game back up 1-1.

“The walks came from a lack of preparation during the week,” said Greene. “But that will change now that I’m getting my velocity back.”

Now in his first four home starts of the season, Greene has compiled dominant numbers going (2-1) with a 1.45 ERA and striking out 30 batters over 24 total innings pitched.

Freddie Norris had two hits, a double and triple, an RBI, and scored two runs.