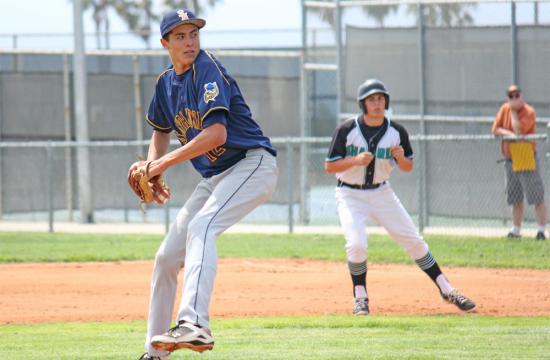 The Vikings went on to win the second game 2-1.

Samohi’s starting pitcher Greene said that he thought the first game of the doubleheader went well.

“My legs were a little tired but by the fourth inning I finally loosened up, I got into a groove, and did what I’ve been doing most of the season,” said Greene.  “Being a rival school it’s always a fun win.”

Greene pitched 13 strikeouts sending a good number of Sharks back to the dugout without hitting the baseball before he was relieved by pitcher Andrew Brown in the sixth inning.

Malibu High School pitcher Noah Simon had 51 strikeouts prior to the match-up against the Vikings, but that didn’t stop the Vikings from racking up runs or Freddy Norris from hitting every single ball Simon threw his way.

In the first Inning Norris scored a run off of a double slapped by Vikings Nobu Suzuki to make the game 1-0.

Eric Gomez started off things for the Vikings in the third inning slapping a double followed by a double by Mason Landis that sent him to third.

Both Gomez and Landis scored off of a double by Leno Lares making the game 3-0.

Norris was powered in again during the fourth inning by Nobu Suzuki to make the game 4-0.

In the sixth inning, Alex Turner got his first hit of the game which allowed him the opportunity to work his magic easily stealing second and third base before being hit in by Norris to make the game 5-0.

Simon did his best to rally the Sharks managing to pick off Norris as he was attempting to steal second.

The Sharks saw some daylight in the top of the sixth inning after Greene retired scoring two runs off of reliever Brown, but it was too late for the Sharks to muster any comeback.

Samohi went on to win the second game of the doubleheader 2-1 with Nick Jimenez pitching a complete game against Malibu High School.

Next game for Santa Monica is away against South Monday at 4 p.m.