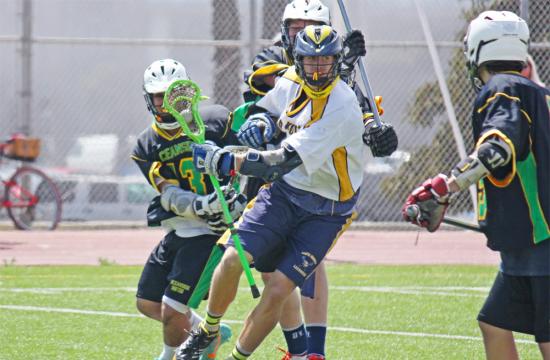 Lacrosse, the game of sticks that looks like a bunch of football players in half-pads and helmets racing around on a grassy field in an attempt to score goals, has become a popular club sport in Santa Monica in recent years and at Samohi.

With the win the Santa Monica Vikings are the number one seed in Southern California and breezing through their second consecutive winning season with the added consequence of filling up the grandstands and entertaining spectators eager to root on the club sport.

So with all this excitement around Santa Monica lacrosse, the question that begs to be asked is; why aren’t the Vikings more then a club team and not a part of the gamut of CIF sports programs offered to students at Samohi?

Chris Carrico, General Manager of the Santa Monica Vikings Lacrosse team, said that he has tried to reason with the Samohi administration about admitting his Santa Monica team-that consists of 90% Samohi students-but that his pleas have fallen upon deaf ears.

“Two years ago, when our sons were beginning tenth grade and our team of 20 was moving up the lacrosse ranks, Jeff Townsend and I approached Samohi in an effort to have them take lacrosse on as a CIF sport,” said Carrico. “The then athletic director had a flat out ‘no’ for us.”

Current Samohi Athletic Director Marisa Silvestri was unable to provide an answer as to why Santa Monica High School had denied a verbal petition for lacrosse to become part of the CIF sanctioned sports that Samohi offers to its students.

Yet Silvestri remained positive that a Santa Monica lacrosse team could one day represent Samohi.

“Santa Monica High School has been in contact with the lacrosse community,” said Silvestri.  “Even though we are unable to bring lacrosse on as a CIF sport this coming 2013-2014 season, it is something that the current athletic department and administration are not opposed to researching as options for the future.”

Interestingly enough Director of Communications for the CIF Southern Section Thom Simmons was not aware of nor has received any requests or petitions from the Vikings community about lacrosse as potentially becoming a CIF sport at Samohi.

So what it would take for the sport of lacrosse in Santa Monica to become part of the CIF and represent Samohi?

“They simply need to pay their sport fee of $50.00 for that sport,” said Simmons.   “(Then) play under CIF-SS rules and start scheduling games.”

CIF rules would require that the Vikings play only against CIF and NFHS member schools, follow all blue book rules, and not play against other club teams.

Teams in the area that Samohi could play against include rivals Culver City, Beverly Hills, and Malibu high schools.

But until the Samohi administration agrees to admitting the sport and paying $50 in dues, the Santa Monica Vikings will have to continue to be satisfied with playing lacrosse as a club sport and possibly even winning a club state championship title.

The Santa Monica Vikings will be competing for the Southern CA Club Championship May 18-19 at Samohi before moving on to the CA State Championship at El Segundo HS June 1-2 with the times TBA.