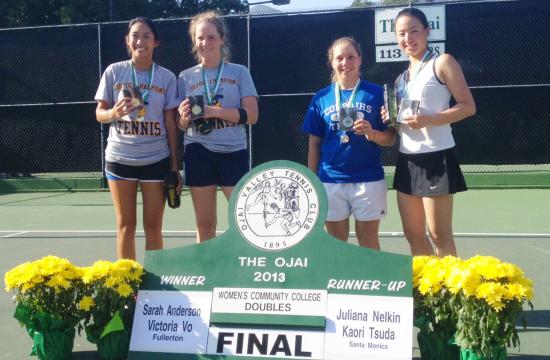 SMC tennis stars Juliana Nelkin and Kaori Tsuda led the Corsairs by reaching the finals in the 2013 CCCAA individual playoffs to determine the California Community College State Champions beating Orange Coast College’s Michelle Cyrus and Mia Hashimoto 6-2, 6-2 in the semi-finals at The Ojai in Ojai, Calif.

But Nelkin and Tsuda lost to Sarah Anderson and Victoria Vo of Fullerton College in the doubles event finals.

Santa Monica College Tennis Coach Richard Goldenson said that he thought that Nelkin and Tsuda played well in the tournament.

“They fought off four match points but lost 6-4, 7-5,” said Goldenson. “The Fullerton team didn’t lose a match all season and were the number one seeds.”

Santa Monica College’s Nelkin and Tsuda came into the match as the number four seeds but got knocked out in the Ojai Tournament by Anderson and Vo.

“Kaori and Julie played some of their best doubles of the year today but the other team played just a fraction of a percentage better,” said Goldenson.  “It was super close.  It could have gone our way if we had taken the second set as we were up 5-4 in the second set.”

Nelkin and Tsuda also participated in the 2013 CCCAA Dual Team Tennis Regional Championships earlier in the week representing SMC to determine the California Community College State Champions, but team SMC lost in the final round of eight away at Fullerton College 5-1.

Fullerton College went on to win the California State Championship beating Serra in a close match 5-4.

The following SMC players were named to the Western State Conference All Conference Tournament Team: