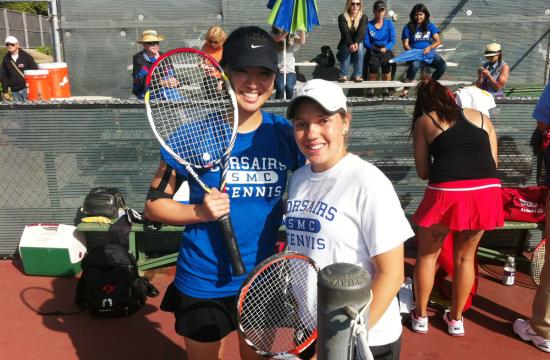 SMC tennis head coach Richard Goldenson said that Tsuda and Nelkin have been working hard to beat a doubles team that defeated them earlier in the season.

“Team Tsuda/Nelkin had been beaten by team Magalhes/Bravo earlier in the season,” said Goldenson.  “Since that match, Kaori and Julie have been working hard on their return game and net rushing.  Yesterday, Julie and Kaori shifted into overdrive and took it to the next level.”

Nelkin and Tsuda were seeded first in the WSC Championships and proved they had what it took to secure the crown.

“It was very exciting to see their growth as doubles players in this tournament,” said Goldenson.  “The coaching staff and teammates are all incredibly proud of their accomplishment.”

The Men’s and Women’s Team and Individual State Championships will be decided in the 113th Annual Ojai Valley Tennis Tournament on April 24-28.

SMC will be sending its top tier of tennis players to the tournament.

In the doubles category, Tsuda and Nelkin, Goldbeck and Ana Beatriz Barcelos de Souza, and Peterson and Victoria Mamatova qualified to represent SMC.

The top team based on regular season performance from Northern California will face the top team from Southern California in a dual match for the CCCAA State Team Championship Wednesday, April 24.  The women’s match will begin at noon at Ventura College and the men at 1 p.m. at the Pierpont Racquet Club.