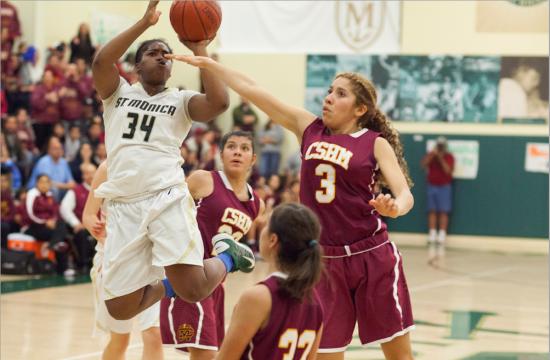 St. Monica (28-7) girls basketball players have been awarded numerous honors for their play in the 2012-2013 basketball season with guard Briana Harris leading the team being named as CIF Division 4-A Player of the Year.

Mariners girls basketball head coach John Skinner was named CIF Division 4-A Coach of the Year for his role in mentoring the girls through a season that saw the Mariners go 6-2 in the Camino Real League and go on to win the CIF Southern Section Crown.

“I am truly blessed to have phenomenal assistants in David Barling, Don Burke and Christina Ferraro,” said Skinner.  “This award and CIF title would not have happened without their tireless work and unified message to the team.”

“She is the first girls’ player to be named CIF player of the year,” said Skinner.”

Harris finished the year averaging 24 points, nine rebounds, four and a half assists and 2.5 steals per game.

Despite only playing two seasons at St. Monica, Harris broke the all-time school scoring record with 1,424 points surpassing 2011 graduate Cory LaGuradia who scored 1,341 points during her time at St. Monica.

Harris added the prestigious Camino Real League MVP to her belt of awards attained during her sports career at St. Monica’s.

“Melissa didn’t have the year she would have liked statistically but her leadership and desire to win a CIF title played a huge role in our success,” said Skinner.  “She made some big time hustle and defensive plays when we needed them.”

Skinner said that he believes that the success the Mariners had in the 2012-2013 basketball season was due to the hard work everyone put into the team.

“We have some wonderfully skilled players like Briana Harris who get a ton of deserved recognition, but this championship would have never happened without each player’s contribution in her own way,” said Skinner. “Seniors D’Arcy Gray and Lisa Engler never get highlighted but were ultimate teammates who provided key minutes and embraced their roles.”