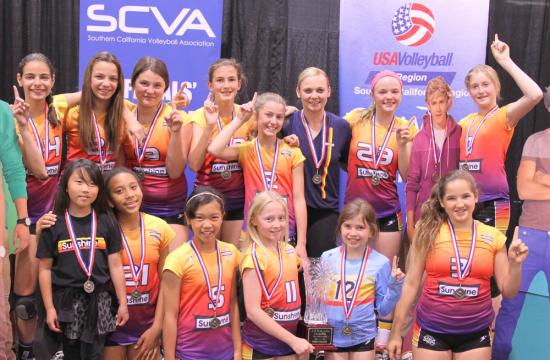 The Sunshine 12 Westside girls volleyball team won the Southern California Volleyball Association (SCVA) National Qualifier at the Anaheim Convention Center Sunday afternoon after an amazing weekend tournament that sported twists and turns and saw the girls pressured to win three matches in a row before they won the championship game in the gold round.

Sunshine 12 Westside girls volleyball Head Coach Lenka Jamrichova said that the girls gave it their all in order to win the SCVA tournament.

“Going 1-2 on the first day was not ideal but I still knew we could get back into it if we played like we did in St. Louis and in the last regional tournament,” said Jamrichova. “But letting the girls know that this tournament would count in where we would get seated for nationals, they came out on fire on day two.”

“Even though the competition wasn’t as tough as day one, these teams still came out wanting to get back into the gold bracket,” said Jamrichova. “In the do or die crossover match facing Wave, we knew we were going to have to give it our all and that they would have to kick us out of the running.”

The Sunshine 12 Westside volleyball team had previously won the St Louis tournament earlier in the season but had to “give their all” in order to win the most recent SCVA tournament in Anaheim.

“Coming from behind we knew that day three would be tough,” said Jamrichova. “But we knew we could do it if we played our A-game.”

The team is now ranked #4 in the country per USA Volleyball.