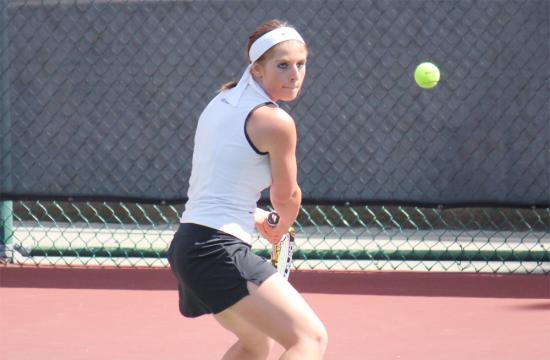 Santa Monica College (12-3) suffered a rare loss against South Coast Conference Champions El Camino College (15-1) losing most of the singles and doubles tennis matches by a score of 8-1 at the Ocean View Park tennis courts in Santa Monica Tuesday afternoon.

Santa Monica College’s number two singles tennis player Kaori Tsuda, an exchange student from Japan, said that the Corsairs are a good team and have the ability to go far in the playoffs regardless of the loss.

“Even though we lost, we are good,” said Tsuda.

The Corsairs went undefeated in the Western State South Conference at 9-0 for the 2013 regular season.

The Warriors recently won the South Coast Conference Championship over Mt. San Antonio College 5-4 on March 26 and extended their dominance over the Corsairs.

Tsuda said that she thought played well against El Camino’s Kia Choi before she got a a leg cramp.  Due to the leg cramp she conceded the match to Choi.

“I had a good day before I got a cramp,” said Tsuda.  “I thought I could win but I stopped because I was tired.”

“Our number one (Shin) is very solid,” said Van Kanegan. “She hasn’t lost all year and she really wasn’t tested today.  She just played hard and came out on top.”

Nelkin did her best to win the third set with her serve in an effort that sent the set to deuce multiple times, but Endo frustrated Nelkin by staying in the set, coming back, and securing the win.

Endo handed Nelkin her first singles loss of the season.

In the number one tennis doubles match, Shin and Choi defeated Tsuda and Nelkin 8-2.

Santa Monica College heads off to Ventura College for the WSC Individual Championships in an all day event at Camino Real Park with singles competition starting at 10 a.m. Friday and continuing until 5 p.m. Saturday.