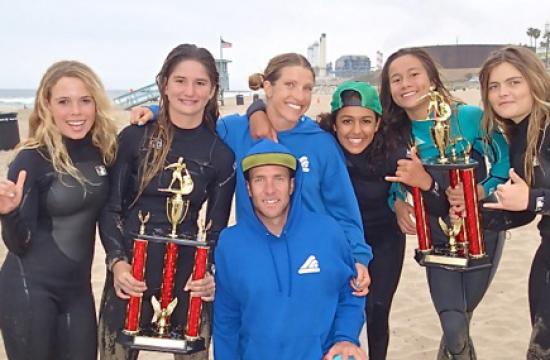 The Samohi surf team found themselves locked inside the A-Frame as they geared up to participate in the Scholastic Surf Series (SSS) High School State Championship surf contest that lined up schools from every region in California from San Diego to Santa Cruz in a surfing competition at Oceanside Harbor that started Saturday and continued throughout the weekend.

The Vikings had held the top ranking placing first place out of ten schools in Los Angeles/Santa Barbara region of the SSS for the 2012-2013 surf season prior to the event but fell to San Clemente and Santa Cruz in the Oceanside surf contest.

Samohi surf instructor Marion Clark said that the surf was good on Saturday and Sunday.

“It was quite a day of surf in Oceanside,” said Clark.  “A building south swell was consistently pumping all day and 70 plus degree weather made a perfect day for the championships.”

Out of 12 teams competing from San Diego to Santa Cruz, the Samohi women took ninth in long boarding and fifth in short boarding, while the men placed ninth in both events and the Vikings placed ninth in co-ed bodyboarding.

Clark said that the girls are not just talented athletes, but the whole package.

“They get good grades in school and they give back to the community by volunteering their time for The Surf Bus Foundation,” said Clark.  “They got this new surf team off the ground by starting a surf and community service club at Samohi called Swell Service.”

Through the club, the Samohi surf team has adopted Ocean Park for Heal the Bay and do monthly beach clean ups. Heal the Bay is a non-profit organization based out of Santa Monica that monitors water quality, hosts beach clean-ups, and facilitates educational outreach in schools and corporations.

The surf vikings have had five regular season contests in the Scholastic Surf Series (SSS), a division of the Western Surfing Association (WSA), in the 2012-2013 school calendar.

The Santa Monica High School girls earned first place honors as a team in the 2012-2013 season in a ranking out of ten schools in Los Angeles/Santa Barbara region of the SSS.

“I have known these girls since they were in elementary school,” said Clark.  “Each one of them learned to surf at my Surf Academy surf camp at Tower 28 in Santa Monica. Only Ines Benomar is a new addition to the team, having moved here this school year from Italy.”

Deep ties allow the girls to make surfing a team effort and they feed off of each other in the water.

“Surfing together makes them want to be better,” said Clark.  “Our coaching is more focused on the quality of these kids’ attitude, their attendance, and their level of stoke in the water than on win, win, win.  We ask them to work hard and stay tuned in the ocean and the by-product has been first place.”

For more information about the Scholastic Surf Series and dates of regular season contests visit  www.surfsss.org.