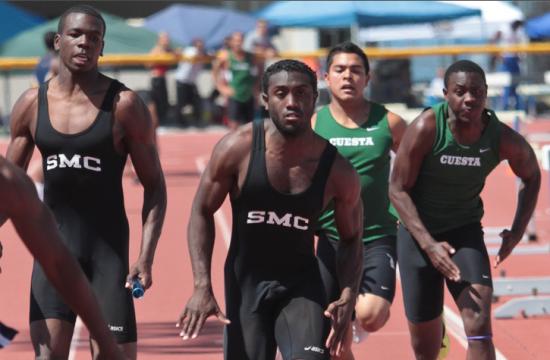 The Santa Monica College track and field team is anticipating the Southern California Championships that will be held this weekend at Antelope Valley College after sixteen Corsairs qualified to participate in the track and field event Saturday afternoon.

SMC track and field head coach Larry Silva said that many of the Corsairs have gotten better over the course of their junior college careers.  Silva singled out Terrance Luevano and Drew Brown as having progressed remarkably since their graduation from high school.

“Terrance is really coming into his own right now in terms of development,” said Silva.  “His last year in high school he didn’t even qualify for the city championships and now he is ranked top ten in the state in the 800 meter and 1500 meters.”

SMC qualifiers in the women’s division for the 4×100 relay include Jenicie Thomas, Elia Sanchez, Kristin Kitabayashi, and Ariel Alexander.

Jocelyne Ferrufino will represent SMC in the women’s 800 meters and Shaynah Patton qualified for the 400 meter hurdles.

Sanchez, Ferrufino, Kitabayashi, and Shaynah Patton will represent the Corsairs in 4X400 meters.

SMC qualifiers in the men’s division include Brown who will run the 800 meters along with Luevano and  Riddick.   Riddick will also run in the men’s 1500 meters.

In the men’s 4X400 meter relays, Zachary Stern will take the first leg  followed by Vickers, Justin Peters, and anchored by Brown.

Vickers will also be participating in the triple jump and is ranked fourth in the state.

In the men’s discus and javelin Jacob Trudahl qualified to represent SMC.

For more information on the meet visit the Antelope Valley College website.