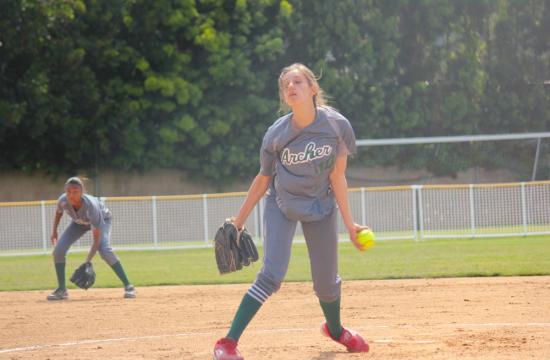 The Archer School for Girls (10-10) softball team has advanced in the CIF Division V playoffs despite a tough schedule and numerous injuries on the Panthers 2013 season after playing only one year of softball in the vaunted Alpha League.

The Panthers varsity softball team unloaded for 17 hits and 15 runs en route to a 15-2 opening round victory over La Puente High School (12-7) in the CIF-SS Division V playoffs Tuesday afternoon.

The Panthers have compiled a total record of 29-10, which includes a Delphic League Championship in the last two years, and were elevated to the Alpha League within the Gold Coast Athletic Conference for the 2013 season by virtue of antiquated conference rules.

The Gold Coast Athletic Conference will cease to exist next year and Archer will go on to play inside the Liberty League in Division VII.

“Despite playing the toughest softball schedule in school history this Spring and key injuries to top players, Archer managed to qualify for the CIF playoffs by finishing fourth in the powerhouse Alpha League by holding a .500 or better overall record,” said Lennon.  “(We) posted a 16-4 record and advanced to the CIF-SS Division VII quarterfinals last year, showed heart and determination throughout this season, and somehow managed to win ten games overall, six of which were one run victories.”

The defense of the Panthers is anchored by senior center fielder Rebecca Samuelson and junior shortstop Shavonne Higgins. Higgins is batting .500 on the season and has four homeruns.

Higgins is joined by offensive threat sophomore Claire Kristof who leads the Panthers with a whopping batting average of .587 and four home runs for the win.

The Panthers move onto the second round of the CIF-SS Playoffs against Calvary Chapel (20-4) Thursday afternoon with the time TBA.