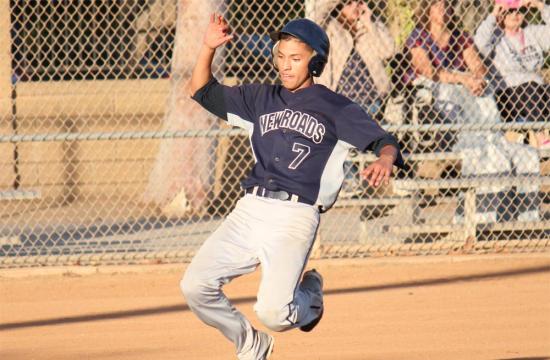 It was the bottom of the first inning and New Roads (8-6) was ahead 2-0 when Jaguars slugger Pedro Dupree stepped up to bat against pitcher Shane Hampton of Coastal Christian (5-8) in the first round of the CIF Playoffs at home Tuesday afternoon.

Dupree connected with the baseball sending the Conquerors outfield racing backwards in a frantic attempt to recover the ball and throw it home, but by then they were too late and Dupree had already circled the bases to make the game 5-0.

By the end of the game, the the Jaguars had extended the score to 21-5.

“That was a really solid performance for our guys,” said Steinhaus. “Of course it helps to draw an opening round opponent that is a young, inexperienced team who had to travel four hours to play in our backyard.”

On the first New Roads at-bat of the game, Jaguars pitcher Christian Vibbiano had already smacked an inside the park home run setting the tone for the rest of the game to come.  By the end of the second inning, the Jaguars were up 12-0.

By the third inning, the Conquerors had already relieved their first two pitchers and were on to their third.

Steinhaus said that the Conquerors reminded him of where the Jaguars were three months ago.

“Coastal Christian reminded me a lot of where we were three months ago, except for the pitching,” said Steinhaus.  “Our big thing all year is that we have pitchers who can control the strike zone, and now we make a lot more plays to support what our pitchers are doing.  That was the difference tonight.”

New Roads came into the CIF playoffs as the second seed and are 5-3 in the Coastal League behind only to Rolling Hills.

New Roads won the second round of the CIF Playoffs defeating Pacific Lutheran 17-6 away yesterday in Compton.

Michael Meller went five for five with six RBI’s and Vibbiano was three for four with a home run.

Next game for New Roads is against Temecula Prep. at Santa Monica High School today at 4:00 p.m.