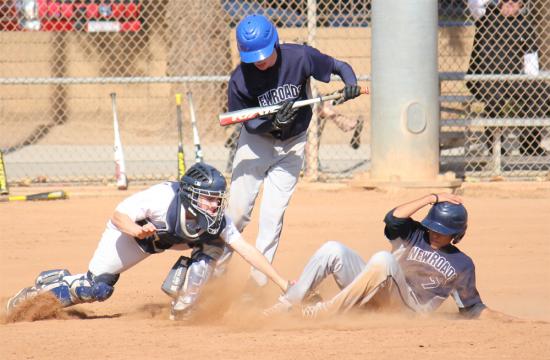 The New Roads (6-5-1) baseball team defeated Wildwood 9-1 for the second time this season at Clover Park Friday afternoon.  The Jaguars are now currently in second place at 4-2 in the Coastal League behind Rolling Hills (8-5).

New Roads Head Coach Matt Steinhaus said that the Jaguars played well defensively and that this contributed to the victory.

“This was the best defensive effort for us all year, especially in the outfield,” said Steinhaus.   “The top half of Wildwood’s lineup is dangerous, and Rockne Carnahan, Dante Park and Chance Gray kept making plays to keep their guys off the bases.”

Rockne started at center field against the Wolves instead of his usual spot in left field and played a solid game.

“He took charge out there,” said Steinhous.  “Even though we put up a nine spot, it’s a different game if a few of those shots to the outfield fall.”

Steinhaus singled out Vibiano as setting the tone for the team.

“And as usual, Vibbz set the tone for us,” said Steinhaus.  “He is the one guy every team seems to fear because he makes so many things happen on offense, and never makes mistakes.”

Next game for New Roads is away against Rolling Hills,who are 5-0 in league, Monday at 3:30 p.m.

By mirrormmg May 1, 2013
in Sports
Related Posts