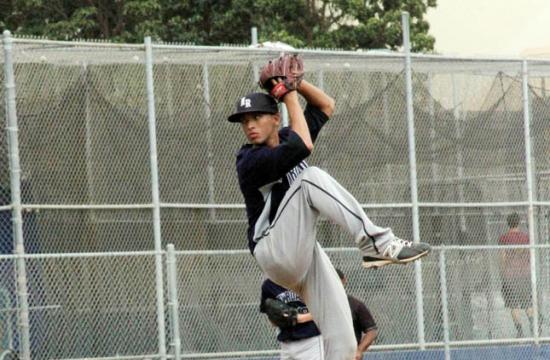 The New Roads (9-7, 5-3) baseball team lost to Temecula Prep (22-4) Tuesday afternoon by a score of 14-3, but not before proving to the entire Jaguar community that they had constructed a solid team that could overcome multiple challenges to have a successful baseball season.

“If someone would have told me that this years team would win just one fewer postseason games than last years squad – after losing four senior starters and having two more would be returning stars from last year still on campus but choosing not to play- I would have laughed right in their face, ” said Steinhaus.  “This team overcame incredible challenges, which also involved patchwork lineups within an hour of game time on some days, and one game right at first pitch.”

Steinhaus said that New Roads played a good final game regardless of the season-ending playoff loss to the Temecula Prep.

“It was a much better game for us than the score indicated,” said Steinhaus.”We made some mental mistakes on the bases early in the game that hurt, but still were down only 4-2 going into the fourth.”

The Patriots scored eight runs in the top of the fifth inning against the Jaguars to put any chance of a comeback out of reach.

“In the end, that was a strong, deep team we lost to,” said Steinhaus. “Playing without our shortstop and number two hitter Michael Meller made it tougher on us, but it would have taken much more than Mike’s absence for us to knock out a good team like Temecula.”

Temecula Prep came into the game undefeated in the Majestic Conference at 8-0 winning the majority of the games for the season and blew out many of the teams they played against during the 2013 season by double figures.

New Roads started the 2013 season 0-3 with a forfeit that could have set the tone for a losing season, but the Jaguars came out and salvaged the year instead by rebuilding a fractured team.

The Jaguars baseball team had just begun to gel and play well together winning six of their final seven games including a 17-6 playoff victory over Pacific Lutheran last Thursday before meeting up with Temecula Prep.

Steinhaus said he was proud of how the Jaguars came together to become a team and overcome numerous challenges presented to the baseball program at the beginning of the 2013 baseball season.

“The kids did more than salvage this as a rebuilding year, the kids had a winning record in both the regular season and postseason,” said Steinhaus.  “Some kids chose not to play for fear that the season would be a throwaway. For the rest who did put the jersey and went out and then gave New Roads its most successful team of this school year, I can’t even come up with the words to capture my appreciation for them.”

“In my 17 years of coaching baseball, I have never been more proud of any team I have ever coached,” said Steinhaus.  “This bunch exceeded all expectations, and it was due to our nucleus of nine kids that were dedicated to make sure our season was successful.”