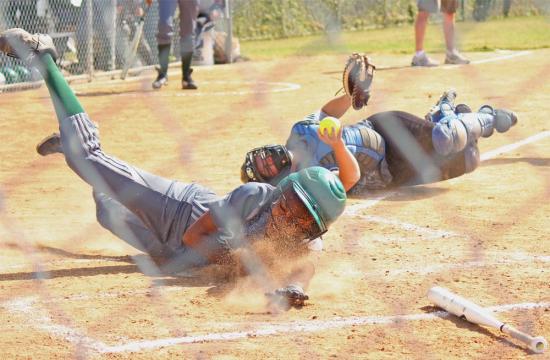 It was the bottom of the seventh inning with two outs in the softball game and runners on first and third. Pacifica Christian’s (12-3) pitcher Chandler Dolan had pitched a near perfect game allowing only one run while Archer High School’s (10-10) pitcher Carolyn Zaccharo had allowed only two.

Archer’s Allie Simon had just circled the bases scoring the Panthers first run of the game after being batted in by her teammate Rebecca Samuelson.

But Dolan made short work of batter Zaccharo by snagging a ball hit right to her to make the final out to end the game.

“Offensively we played well and pitched lights out,” said Dolan.  “But you can’t take anything away from Archer.”

Archer Head Coach Denny Lennon said that he thought that both the Seawolves and Panthers pitchers threw good games and that both teams played well even though he thought thought the outcome should have been different.

“Their first two runs were a little quirky,” said Lennon.  “The first girl that got in, it was a questionable call.  And she ended up coming around and scoring.”

The first of the Seawolves to score was Emma Miller who had a double and was later hit in by Walanda Flowers during the first inning.

The Seawolves second run was scored by Flowers during the fourth inning.

“We deflected a ball that was going straight to our shortstop so she would have been out,” said Lennon.  “So the game could have gone extra innings at 0-0.”

The fourth inning ended with a pickle when Archer’s Claire Kristof ran down Pacifica Christian’s Kate Miller for an out as she attempted to steal home only to rethink her situation and decide to return to third only to change her mind again and run towards home.

At this point in the game, Pacifica Christian held the lead 2-0.

In the bottom of the sixth inning, Archer’s Kristof whacked a ball deep into right field but Nehemi Mejia caught her second fly ball of the inning to send the game into the seventh.

But Archer pitcher Zaccharo struck out two Pacifica Christian batters and picked up a ground ball and tossed it to first for the third out of the inning giving the Panthers one last shot to score against the Seawolves.

Yet Archer could only muster one run and the Seawolves prevailed holding held back the Panthers momentum shift late in the 7th inning to win the game.

Pacifica Christian is on a three game win streak beating the Oakwood Gorillas 17-7 Tuesday afternoon before defeating Providence 10-6 away Thursday afternoon to secure the number two spot in the Liberty League.

As per their league records, both teams have qualified for the CIF playoffs.

Check back in the sports section at smmirror.com for playoff updates and seedings for the Pacifica Christian and Archer softball teams.