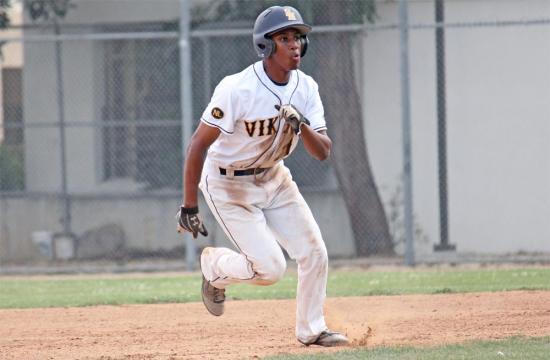 It was the top of the seventh inning with the bases loaded and two outs.  The Santa Monica Vikings (20-10, 10-0) needed just one more out to cap off another victory and clinch their spot in the CIF playoffs against rival Culver City (18-6, 8-2), and the Vikings did just that winning the game 7-4 at home Thursday afternoon.

Brown was the third pitcher to play in the game against the Centaurs replacing reliever Ryan Barbarin, who had pitched five innings, and starter Connor Greene who had left due to an oblique strain after one inning.

Samohi did nearly all its damage in the second inning where the Vikings plated six runs on five hits.  Lino Lares hit an RBI double to start the rally and brake things open for the Vikings. Later in the inning, with the bases loaded and no outs, Nobu Suzuki singled in two more runs making it a 6-1 ball game.

Samohi head coach Kurt Schwengel said he was pleased by the response of his team after seeing their ace go down.

“That inning took a lot of pressure off our pitching, especially after we had to take out Connor,” said Schwengel. “Those big innings usually happen to us, so it was nice to be on the other side of one for once.”

With Greene going down so early in the game, relief pitcher Barbarin came in for the Vikings to pitch five solid innings to keep the Centaurs off the scoreboard before Brown came into the game.

Brown walked the first hitter he faced, gave up a single to the next batter, and then walked the next two batters which forced in a run to cut the lead to 7-3.

A sacrifice fly scored another run making it 7-4.  With only one out, all it would take was a single to load the bases back up and put the go ahead run at the plate.

As the pressure mounted on Brown, he struck out the next batter on three pitches. Brown then forced the following hitter to hit a weak ground ball to shortstop Mason Landis to end the game and give the Vikings a 7-4 victory.

Greene said that he thought the seniors were a talented group of baseball players.

“We have a strong group of seniors on this team,” said Greene. “So we are looking forward to the challenge that awaits us in the playoffs.”

Leadoff man Alex Turner who recorded three doubles and scored two runs in a perfect day at the plate said it was an interesting game.

“Andrew made it pretty interesting in the end,” said Turner. “But we came out with the win so I couldn’t be happier.”

The Vikings will now have to wait and see who they will face in the first round of the CIF playoffs. The Vikings are the number one seed as the newly crowned Ocean League Champions.

Check back in the sports section at smmirror.com for updates to the story.