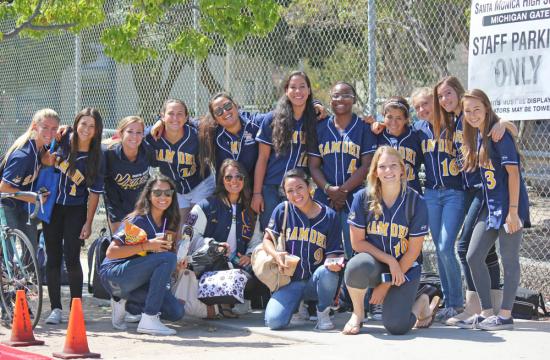 The Santa Monica High School (20-10) girls softball team won against Dos Pueblos High School 3-2 in the CIF Semi-Finals with the final run for the Vikings hit in the eleventh inning away Tuesday afternoon.

With the win, the Vikings advance to the CIF Championship game.

The Vikings had won against Paloma Valley 8-1 in the CIF Quarterfinals Thursday afternoon to advance to the CIF Semi-Finals after going undefeated in the Ocean League posting a record of 10-0.

Samohi softball captain Jennifer Eyler said that the Vikings have been working hard throughout the 2013 season and this hard work has fared well for the Vikings in the playoffs.

“We have been working hard and lately we have been doing really well,” said Eyler. “We kind of picked it up towards the end of the year. We have just gone all out, acted like every game was our last game, and so far we have done pretty well.”

Eyler said that the Vikings have been working on hitting and getting their hands up since entering the playoffs and this has improved their play.

“We started off a little bit slow but towards the end we kind of picked it up,” said Eyler. “We have been doing what we do like hit the ball and make the plays to win every game.”

The Vikings advance to the CIF-SS championship round and will play Hemet (27-5) at UC Irvine Saturday at 12:30 pm.

For links to photos of the Vikings game against the Chargers, visit www.maxpreps.com