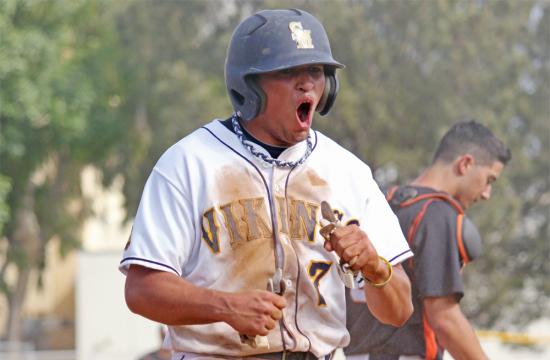 With league play quickly coming to an end, Santa Monica (17-10, 7-0) added a seventh straight victory against rival Beverly Hills (10-12, 4-3) to continue the Vikings dominance within the Ocean League and cruising to a 6-1 victory at home Tuesday afternoon.

Samohi pitcher Alex Gironda, who took the mound against Beverly Hills, said that he did not like the Normans.

“It felt good beating Beverly Hills, especially because I hate them,” said Gironda. “They were making contact today, but our defense did a great job helping me out and that’s all you can ask for.”

With Gironda working quickly and pitching to contact, the Vikings defense converted outs on every defensive opportunity limiting fielding errors against the Normans.

Vikings Shortstop Mason Landis said that he was striving to be the best shortstop in the Ocean League.

“My main focus is to be the best shortstop I can be,” said Landis. “If there is a ball hit within my range, I am going to make the play.”

Samohi head coach Kurt Schwengel said that the Vikings are coming together as a team.

“At first it was hard to sell the guys on the idea of playing small ball,” said Schwengel. “But as the wins have piled up, it became a little easier. Now it’s become about the team instead of the individual, and that’s all I could ask for.”

The mentality of “playing small ball” has proven to be a winning formula for Samohi and a solid defense coupled with dominate pitching has become a trademark in every single Vikings victory this season.

With the game tied at 1-1 a piece at the bottom of the fourth inning, Connor Greene-who is normally known for his pitching prowess- stepped up to the plate.  With runners at each corner, he didn’t waste any time laying down a perfect bunt.

The bunt brought in the go-ahead run and turned the game in favor of the Vikings. A sacrifice fly by lead-off man Alex Turner brought in another run to give Samohi a 4-1 lead.

The Vikings would tack on two more runs in the sixth inning when Beverly Hills left fielder Ethan Forman dived but missed a ball hit by Greene allowing Greene and first baseman Eric Gomez to round the bases and score runs.

Six runs proved to be enough support for starter Gironda who allowed only one run in seven innings to earn the win.

Samohi looks to extend their winning streak Thursday in a night game away at La Cienega Park against Beverly Hills at 6 p.m.