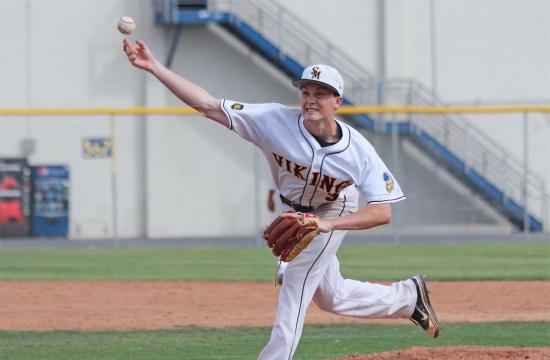 Samohi (20-11) entered the first round of the CIF playoffs without star ace senior pitcher Connor Greene on the mound, and the absence of the Vikings leader was felt as the Vikings lost to Knight (20-5) 8-3 at home Thursday afternoon.

Samohi head coach Kurt Schwengel was very pleased with his team’s performance for the 2013 season, but saddened to see the season end the way it did.

“You have to tip your hat off to them, especially to Cabral,” said Schwengel. “The last thing we expect here is to see a ball fly over the left field fence so that was quite a poke. We had a great season and it will be awfully hard to see these seniors leave.”

Greene was absent from the playoff game as he was still dealing with an oblique injury from the Ocean League Championship game against Culver City last Friday.

Greene had to sit in the dugout and watch his teammate, pitcher Alex Gironda, take on a heavy swinging Hawks baseball team and was powerless to do anything about it.

Starting pitcher Gironda had been dominant when pitching at home all season long but after a few innings, the Hawks had his number and began to connect with the ball resulting in the elimination of the Vikings in the first round of the CIF playoffs.

Early in the game it looked like the trend of Gironda winning at home was going to continue as the junior started pitched a no hitter in the first three innings of the scoreless game.

Gironda kept the Hawks batters off balance by mixing speeds and controlling the game’s tempo.

On the offensive side the ball the Vikings managed only two hits for the day, but did draw six walks as a team.

In the bottom of the fourth inning, Samohi got one of those two hits when senior Mason Landis singled with two outs to keep the inning alive.

Hawks pitcher Joseph Cochran buckled to the pressure burying three straight wild pitches which allowed Landis to cross the plate and score the game’s first run to give the Vikings a short-lived 1-0 lead.

With the first runs of the game on the board, the pressure shifted back to Samohi’s Gironda in the top of the fifth inning.

The first two batters got on base for the Hawks with back-to-back singles. A sacrifice bunt moved the runners over to second and third as the line-up turned over back to the top.

Gironda knew that a base hit would tie up the game and battled back getting a strikeout for the second out of the inning.

Then came the meltdown.

Gironda hung a curveball on a 0-2 count and watched as his mistake got slapped up the middle to score two runs and shifted the momentum of the game in favor of the Hawks as they took the lead 2-1.

But the damage wasn’t over yet.

Hawks catcher Edgar Cabral, who had injured his ankle sliding into second earlier in the game, limped his way to the plate.

One leg and all, Cabral demolished the first pitch sent his way by Gironda to deep left field sending the ball over the fence silencing a large Samohi crowd who had gathered in attendance.

“That 0-2 curve is what killed me,” said Gironda. “I just missed my location on it and left it up enough for him to hit it. I feel like I let down my seniors and I’m really going to miss those guys.”

Regardless of the playoff season loss, many senior Vikings are expected to get a chance in the minor leagues and possibly sign with big league clubs.

Pitcher Greene is anticipating to be drafted between the sixth and tenth rounds in June’s upcoming amateur draft.