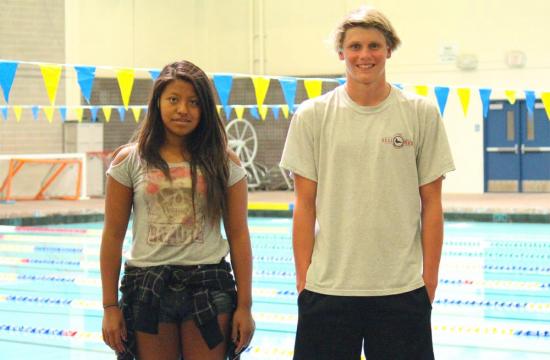 Samohi swimmers Brendan Casey and Cathy Gomez competed in the 2013 CIF-SS Division II Championships (NFHS) at the Riverside Aquatics Complex in Riverside all day Saturday representing the Vikings and excelling in the the 500 freestyle swim competition.

Santa Monica High School Swimming head coach Matthew Flanders said that he was impressed by how much Casey and Gomez have improved throughout the course of the season.

“Those two have done a fantastic job for us this season,” said Flanders.

16-year-old Casey said that his time has improved dramatically since he began swimming in the CIF meets.

“It was just a standard season and I was doing average until CIF,” said Casey.  “Then I had pretty big drops in time.”

Casey nabbed second place at the CIF Championships in the 500 freestyle with a time of 4:27:43 and was one second away from tying the Ocean League record.

14 year-old freshman Gomez said that she was surprised at her success in the water especially in the 100 and 500 freestyle races.

“The season hadn’t been that great for me but in CIF I had huge drops,” said Gomez.

Gomez swam a personal best time of 5:03 in the 500 freestyle at the league finals which advanced her to the prelims of the CIF Championships Saturday.

“She is an awesome girl,” said Flanders.  “She has a ton of talent and a strong work ethic.”

But even though the CIF-SS swimming championships are over, the swimming season isn’t over for Casey as he is headed to the 2013 Open Water National Championships Sunday that begins at 8:00 a.m. at Castaic Lake in Santa Clarita.

The National 5K National Championships is an annual open water swimming competition that qualifies swimmers for the Olympics.

“It’s an Olympic event,” said Flanders.  “And the way he’s going, he’s on track to be in the Olympics for that event.”