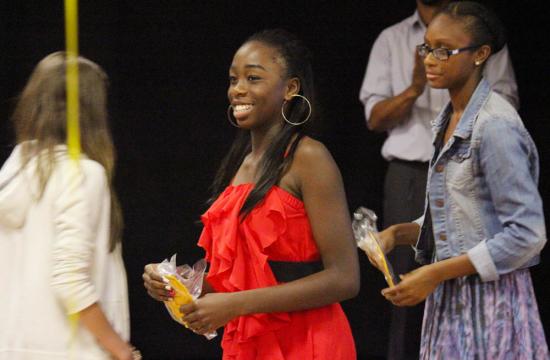 The Santa Monica High School Track and Field team held their annual awards night at the Moose Lodge in Santa Monica Tuesday night in a ceremony that honored all of the Vikings who participated in the 2013 championship season.

“I am extremely proud of our boys and girls track team this season,” said Fischer. “The girls varsity team are the dual meet Ocean League Champions.”

The Vikings who ran in the two record breaking relay races that were Taji Mckinley , Lauren Schultz, Kloey Battista and Joylynn Daily.

“They made it all the way to CIF finals,” said Fisher.  ” We qualified 13 athletes to enter the CIF Prelims and are looking forward to an even better season next year.”

Shot put league champion Jessica Walker said that the Vikings did what they were expected to do during the season.

“I feel the track team did what was expected of us, especially the girls track team,” said Walker.  “As the season progressed, many of the individuals dominated within their own event. We did progress as a team, but it all comes down to yourself in the end and the work ethic that you put in as an individual.”

The 2013 Momma Bunny Service Award was given to Helga Schlier and Amada Battista for their parental contributions and commitment to the 2013 Samohi Track and Field team.