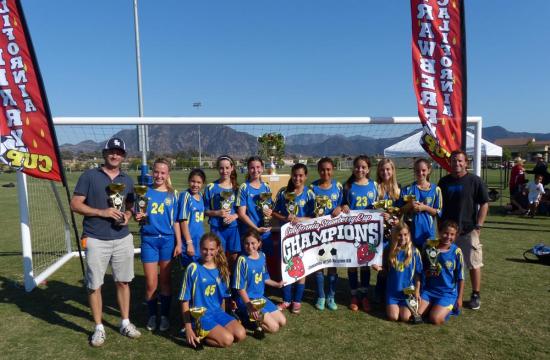 The Santa Monica AYSO Girls U14 won against Camarillo 1-0 in the 19th Annual Strawberry Cup soccer tournament held in Camarillo Sunday, May 12 after carding an impressive 4-0 record en route to their championship win.

The girls were perfect in their final four games racking up four shutouts, and winning by scores of 5-0, 1-0, and 3-0 in pool play.

Santa Monica met the Camarillo team in the championship game who came in also with a perfect record, three shutouts, all with the same scores.

The final game was a hard fought match with the score tied 0-0 at the half.

Early in the third quarter, Val Romo received a pass from Fiona Story and scored on a bending shot from just inside the right touchline to make the the game 1-0.

Santa Monica maintained a strong defense for the remainder of the game.