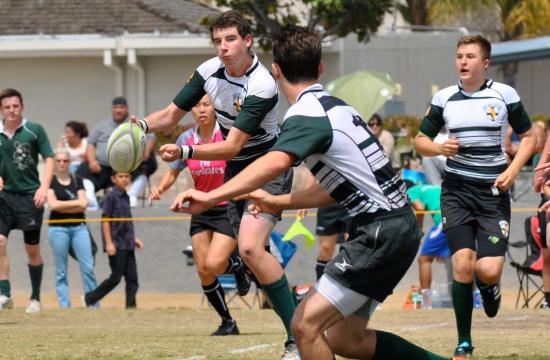 Director of Youth Rugby Kilian Kerwin said that the predominant play of the boys and their advancement in the rugby playoffs was due to the hard work of the SMRC coaching staff.

“Our superb youth coaching staff has prepared our boys well and it is not surprising that our upper division teams have all advanced through the playoffs,” said Kerwin.

In the SMRC U18 rugby game, the Dolphins scored in the first 30 seconds as the Sharks took the opening kickoff and tried to break through the SMRC defense.

But Garrett Manoukian intercepted the ball and ran ten yards before passing the ball to Joe Simon who sprinted through the defense and scored under the posts.

Santa Monica controlled possession for the next ten minutes with strong rolling mauls from the line-outs while Alex Walsh kicked two penalties from 40 yards to put the Dolphins ahead 13-0.

This was followed shortly by two tries from center James Cherrington.

Back Bay breached the Santa Monica back line to score under the posts just before half time, but Walsh kicked another penalty to give the Dolphins a commanding 26-7 lead at the half.

In the second frame, Back Bay scored again but Evan Clark sealed the victory with a break through the Back Bay defense.

In the SMRC U16 rugby game, the Dolphins went up early in the first half on some solid phase play that culminated in a try by Benny Gonda.

SMRC executed their kicking game pinning San Clemente in their own half of the field for the majority of the match.

Kieran Kerwin converted the try and that was the end of the scoring for the first half as both teams had worn each other down with tactical play.

The Gators came out strong in the second half exploiting some Dolphin penalties and managed an unconverted try to pull within two points at 7-5.

A couple of kicks led to scores just minutes apart by Cormac Heaney and Olan Moon White.  Even though the San Clemente was down 17-5, the Gators managed one last try at full-time to win the game but were stopped short by the Dolphins defense.

On the SMRC U14 team, the Dolphins fast-attacking back line quickly swept through the defense of the Sharks.

First-half scores from Ryan Suggs and Ryan Dominic pushed the home side to a 19-0 lead before Back Bay responded in the second half to score.

Two quick scores from Chase Capiti and another from Dominic secured the home team’s victory.

“We’re looking forward to more success this weekend in the semi-final round,” said Kerwin. “And then on to both the SCYR Championship May 11th in Fullerton and the California State Cup on May 25th in San Francisco.”

The U16 Boys face Hawaiian Gardens for an 11:15 a.m. kickoff away at the Fedde Sports Complex in Hawaiian Gardens. Winners of these matches will advance to the SCYR Championships May 11th at Cal State University Fullerton.

Visit the Santa Monica Rugby Club for more information and how to get involved with the program.