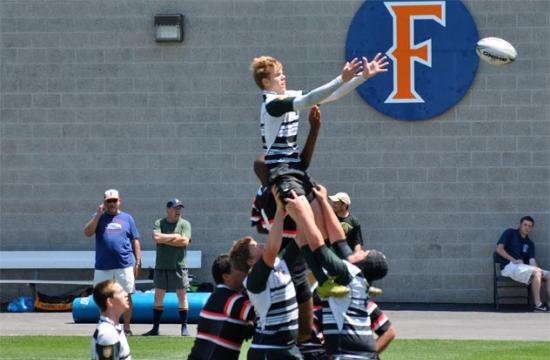 The U14 and the U16 Boys of the Santa Monica Rugby Club won their 2013 Southern California Youth Rugby championship matches at Cal State Fullerton Saturday afternoon and will play in the California State Cup in San Francisco Saturday, May 25.

In the opening ten minutes of the U14 game between the SMRC and Santa Clarita, the Dolphins were pinned in their own half by the Tigers, but thunderous tackles from the Dolphins prevented the Tigers from scoring.

SMRC Director of Youth Rugby Kilian Kerwin said that he said that the consistent attack of the Dolphins led to the victory of the SMRC over the Tigers.

“Santa Monica responded imposing their fast-paced, slick-passing offense into the game,” said Kerwin.  “Repeated attacks eventually overwhelmed the Santa Clarita defense and opened up a channel for Ryan Dominic to race down the wing to score the first try.”

Dominic added a second try shortly afterwards off of a pass from scrumhalf Cole McPherson and flyhalf Quinn Perry.

Right before time expired in the half, Ryan Suggs and Avery Vignolle made a try saving tackle to prevent Santa Clarita from scoring and keeping Santa Monica up 12-0.

In the second half Santa Monica dominated the scrum using their imposing forward pack to gain the ball for long periods of time.

“Our backline of Perry, Suggs, Dylan James, and Sol Broady passed the ball with speed and style that repeatedly tore through the Santa Clarita defense,” said Kerwin.

Further tries from Broady, Dominic and Chase Capiti, along with a sensational power run from Andreas Gonzalez, and penalty conversions from Jack Gibb, racked up an impressive 43-0 final score.

SMRC U14 Head Coach James Gibb said he was proud of the Dolphins. “I’m so proud of these boys,” said Gibb. “They really are an exceptionally talented group, and some have their eyes set on playing for the USA National team someday. After today’s display there’s no reason why not.”

The U14 Dolphins ended their season with an undefeated 17-0 record.

With two minutes left in the game of the U16 game, the undefeated Young Aztecs held onto the two point lead but an Aztec penalty gave the Dolphins the option to kick for three points.

SMRC’s Kieran Kerwin lined up the kick and booted a low trajectory ball to win the game for the Dolphins 16-15 Saturday afternoon.

Dolphins U16 head coach Conor Shalloe said that he was happy with the win.

“We are absolutely delighted with this win,” said Shalloe.  “The Aztec players are the real deal and the score in this match truly reflects what a battle it was.”

SMRC’s Brandon Gaines started off the Dolphins with a run to the weak side from a lineout on the Aztecs 22-meter line.  Gaines cruised past the Young Aztecs until he ran across the tryline to put the Dolphins up a quick five points in the first two minutes of play.

The Young Aztecs battled back, but tactical kicking by the Dolphins kept San Diego in their own end.  A penalty awarded to Santa Monica was within range so scrumhalf Kieran Kerwin successfully kicked for posts to put the Dolphins up 8-0.

The teams battled back and forth driving forward with offensive bursts and back with defensive surges until an poor pass by the Aztecs was picked up off the ground by Dolphins fullback Olan Moon-White.

Moon-White took the ball and sprinted 60-meters to the Aztec try-line.  By halftime, the Dolphins had extended the lead to 13-0.

But the game was far from over.

Strong San Diego pressure forced Santa Monica to err near their own goal line and the Young Aztecs capitalized on the error with a converted try to add seven points and make the game 13 -7 at halftime.

The Young Aztecs came out strong in the second half and the Dolphin defense initially repelled the attacks, but after fifteen minutes of scoreless play, the Aztecs broke through the Dolphins line and scored to make the game 13-12.

Two minutes later San Diego took their first lead of the match scoring off a penalty kick to make the game 15-13 until Kerwin kicked the final penalty kick to win the game.

Next game for the the U16 Dolphins is in the SCYR California State Cup at Treasure Island in San Francisco May 25th and will compete against the NCYRA champions from Granite Bay.

In the day’s final match at CSUF, the Santa Monica U18 Boys were defeated by San Diego by a score of 36-7, but the Dolphins will still travel and compete in the California State Cup as the Mustangs were unable to accept the State Cup invitation.