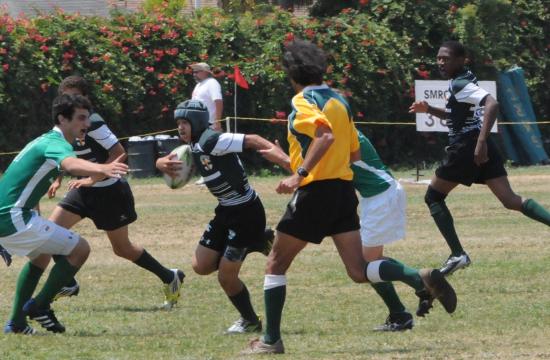 The U14, U16, and U18 Boys teams from the Santa Monica Rugby Club won their semi-final matches Saturday and with the sweep, the teams will advance to the Southern California Youth Rugby Championship to be held Saturday, May 11th, at Cal State University Fullerton.

SMRC Director of Youth Rugby Kilian Kerwin said that he thought it was a great day for the Santa Monica rugby club.

“It was a great day for our club,” said Kerwin. “Three exciting victories for our youth teams and then a big win by our men’s team in the first round of the National Championships.  It was especially meaningful to see how many of our youth players stayed to tunnel out the men’s team and then watch their match.”

SMRC U18 Coach Charlie Lydon was proud of the way the Dolphins kept their composure against the Eagles.

“Hawaiian Gardens is a very good side and we know they’ll always give us a tough match,” said Lydon. “Our Santa Monica boys came back from behind and that says a lot about their character.”

In the first two minutes, the Dolphins turned the ball over to the Eagles who scored quickly.  SMRC counter-attacked from the kick off driving the ball deep into the HG twenty-two. SMRC then passed the ball across the back-line that sent Ole Woods in to score from the left corner.

But a hard hitting Eagles defense kept the Dolphins behind at half time 14-12.

In the second half, the Dolphins started with a try by center Garrett Manoukian who put the Dolphins ahead with a score to make the game 19-14.

Hawaiian Gardens responded with a try after SMRC failed to clear out a loose ball in the try zone, but the Eagles missed the conversion leaving the score tied at 19-19.

SMRC quickly counter-attacked but drew a penalty, leaving Alex Walsh to put in three off a kick that put the Dolphins ahead 22-19.

With ten minutes to go, the Eagles responded by making a long-range penalty kick to tie the score 22-22.

SMRC finally pulled away and scored two unanswered tries from James Cherrington and Adan Hernandez to finish the Eagles off 36-22.

In the SMRC U14 Boys game, the Dolphins took on the San Clemente Gators.

The Dolphins struck first with a series of fast attacking moves that gave winger Damiko Banks space to race into the open and score the first try against the Gators.

San Clemente quickly responded with a line-out and drive that leveled the score.

Santa Monica went on to pin the Gators on their own goal line for a long period, but the Gators repelled the attack until the Dolphins Sol Brody broke the deadlock with a run to score under the posts.

In the second half, the Gators scored twice on the Dolphins to close the gap and make the game 19-18.

SMRC responded utilizing the power of their big forwards to dominate the scrums.  With the scrums won in the trenches, good open field passing by Quinn Perry and Dylan James did well to release the Dolphins speedy wingers who swept through to score three tries in quick succession.

Andreas Gonzales then scored on a one-handed catch with under two minutes to go while running at full speed for a score under the posts to give the Dolphins a convincing 41-25 win.

In the Dolphin U16 Boys game away against Hawaiian Gardens, the Dolphins  had their hands full against the home team.

SMRC conceded two quick scores to the Eagles and had to play catch-up for the remainder of the rugby game.

The Dolphins got on the board with a penalty kick from Cormac Heaney to make the score 10-3 at the half.

The score continued to see-saw throughout the second half until Kieran Kerwin made a penalty kick that put Alec Kohn into position to score a try which was then converted by Kerwin to give the Dolphins the lead 13-10.

Hawaiian Gardens countered with another try to make it 15-13 but then a try from Noah Anderson off a tap penalty saw the Dolphins pull out in front again 20-15 with four minutes to go.

Hawaiian Gardens responded with a try under the posts to make a conversion to put HG up 22-20 with less then two minutes left in the game.

With time running out, SMRC center Carter McNeill stripped the ball out of a Hawaiian Gardens maul, and as he was being tackled, off-loaded the ball to fullback Olan Moon White who sprinted across the try line and touched the ball down just at full time.

Kerwin converted the kick and the Dolphins finished with a 27-22 victory.

By mirrormmg May 7, 2013
in Sports
Related Posts