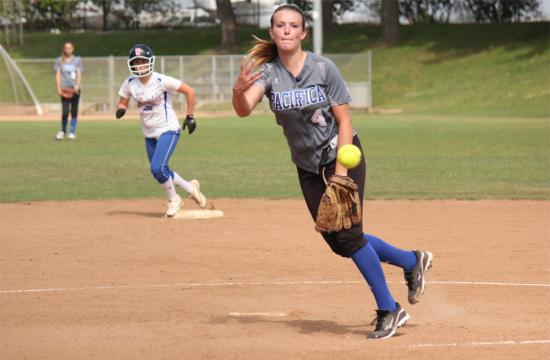 Pacifica Christian’s (13-4) pitcher Chandler Dolan got her first taste of what it was like to play against a hard-pitching hard-hitting softball team with the Seawolves loss to the Academy for Excellence (17-4, 8-0) 12-0 at home Tuesday afternoon.

Even with the loss, Dolan and the rest of Pacifica Christian were all smiles  mainly because the Seawolves knew that they had done very well for a first year softball team.

Pacifica Christian Softball head coach Mike Dolan said that all of the goals set for the team at the beginning of the season had been met by the end.

“Our goal was to make the playoffs,” said Dolan.  “We had no visions of grandeur.”

Pacifica Christian’s play in softball has been notable especially since the Seawolves have never had a softball team before.

Perhaps this is the reason why the large Pacifica Christian crowd cheered strongly as the Seawolves got a base hit in the bottom of the seventh inning snapping Knights pitcher Cassandra Williams near perfect game against the Seawolves.

The Seawolves felt no shame in losing to the powerful Knights and were just happy to have qualified to play in the playoffs against them.

Pitcher Dolan made the best of the loss and said that playing softball with the Seawolves has been a growing experience for her.

“To have this rude awakening that everything is not going to be a breeze and to know that we can come this far with such a young program has been a really fun experience regardless of the outcome,” said Dolan.

Pacifica Christian placed second in the Liberty League at 7-2 winning ten of their last twelve games of the 2013 softball season.

Pacifica Christian catcher and sophomore Emma Miller said that she was shocked at how well her neophyte team performed throughout the 2013 softball season.

“I didn’t think that we would do so well at the beginning of the year,” said Miller.  “But coming so far is really amazing. I am really proud of everyone. “

Miller and Dolan are both planning to return and play softball next season.

Miller said that most of the young team will be coming back for the 2014 season and that the Seawolves will only be losing two girls to graduation.

“We will pretty much have the same teammates next year,” said Miller. “Most of our players have never even played softball before and throughout the season that’s kind of been our default.  But most of us are coming back next year, so I hope that helps.”

Pacifica Christian ends their season on a loss but has proven that they are first class softball competitors by winning close games throughout the season adding yet another competitive sport to the Seawolves vaunted athletics program.