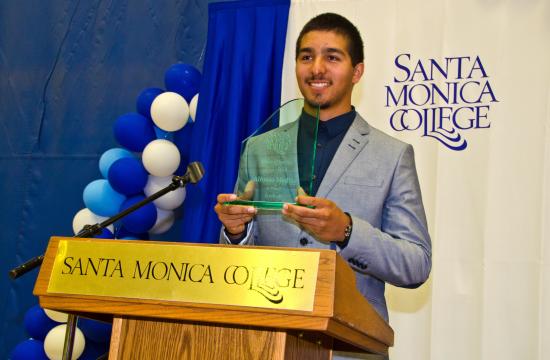 Santa Monica College quarterback Alfonso Medina – who led the Corsairs to back-to-back Conference Championships for the first time in 30 years – was named 2012-13 Student Athlete of the Year on May 23.

Medina was named one of 17 outstanding SMC students as 2012-13 Student Athletes of the Year in their individual sports, but this is only the second year the college picked an overall winner. All the student athletes were selected for demonstrating scholastic achievement as much as athletic talent and persistence.

The awards to the diverse group of students were presented at the annual awards breakfast sponsored by the SMC General Advisory Board, a community support group.

Medina, who is currently at Weber State University in Utah, threw more than 60 touchdown passes, breaking the career record at SMC. He was chosen First Team All-Conference and First Team All-California Region 6 and 2012 Offensive Player of the Year, as well as setting two school records in touchdowns in a single season and in a career.

“Alfonso Medina is an exemplary young person with a bright future ahead of him,” SMC Community Relations Director Judy Neveau said. “Alfonso comes from a supportive family and has two younger brothers who look up to him as a role model. He in turn supports them in their Little League efforts and attends as many of their games as he can. He succeeds off the field too, maintaining excellent grades to earn him a place on the SMC Honor Roll.”

Medina is majoring in Applied Mathematics and is planning to continue to graduate school and becoming a civil engineer.