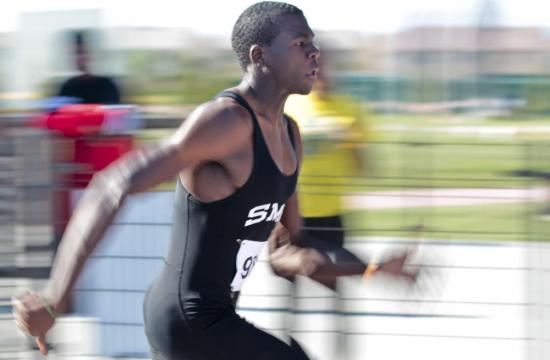 SMC’s Carzell VIckers, a 6’4″ 190 pound athlete, competed in the California Track and Field Championships placing sixth in the triple jump event with a distance of 14.43 meters in San Mateo Saturday afternoon.

Vickers holds a personal triple jump performance record of 14.73 meters gleaned at the Western State Conference Championships on April 19 and this jump ranks him fourth in the State of California.

SMC Head Coach Larry Silva said that Vickers recent performances in the track and field triple jump event have been nothing short of amazing.

“He was pretty much an unknown and had used up all of his football eligibility,” said Silva.  “He came out for track because his goal was to get faster in football.  To his credit he came in and didn’t miss practice, worked really hard, and developed.”

But even though Vickers did well, his team only made it to Western State Conference Championships.

Silva said that Vickers is a diamond in the rough and that is why he has been able to catch on quickly and improve his times and his jumps.

“He’s got talent,” said Silva.  “He’s got that hidden gem type of thing. He qualified to be in the 4×400 so we started training him for the 400 meters and his time started dropping dramatically.”

Silva said he was shocked that right before the Golden West Last Chance meet in April, Vickers asked if he could participate in the triple jump.

“He said, ‘I’d like to try the long jump and the triple jump,'” said Silva.  “So I said, go do that.  And when I looked again, all of the sudden he hits the board and he flies.”

Vickers said that he has improved throughout the short track and field season at Santa Monica College.

“At first it started off a little rough but I’ve improved since then,” said Vickers.

Vickers was a virtually unknown athlete at SMC, playing football in 2011 and 2012 overshadowed by the bulk of talented receivers playing on the Corsairs football team.

Yet in the CCCAA in the triple jump event, he has quickly arisen to become ranked fourth in state.

Vickers placed sixth with a triple jump of 14.66 meters in the prelims at the Southern California Track and Field Championships last weekend and then 14.31 in the finals.

But Vickers said that he could have jumped further if he had been feeling better.

“Going into the last track meet, I was a little sore,” said Vickers.  “So it was probably my worst jump since I started.”

Vickers career long jump of 14.73 meters was at the Western State Conference Championships.

Interestingly enough, Vickers had only been training for the triple jump event for a few weeks.

Silva thinks that Vickers would do well at a four year college and possibly even have a shot at the Olympics with the progression he has shown on the Santa Monica College track and field team.

To make it to the Olympic trials, Vickers would need to jump approximately 52 feet.

“For him to be jumping 48 feet after only three weeks, he’s the biggest gamble I would take,” said Silva.  “He’s very young in the sport and doesn’t even use his arms properly so I think it’s fair to say that he could go really far with the proper training.  If his progression goes as it should, I can see him at the Olympic trials in a few years.”