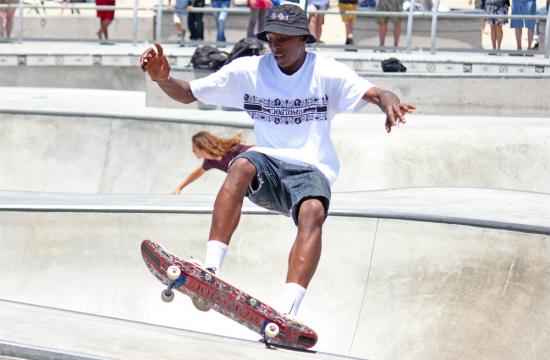 The first day of Summer ignited in style attracting thousands of Westside skateboarders who took to the streets on the skaters “holiday” aptly named national Go Skateboarding Day having the effect of packing the local skateparks and stoking skaters in the process.

16-year-old Leandre Sanders said that the Go Skateboarding Day event was not just a local phenomenon but a national one.

“Today is the national Go Skateboarding Day,” said Sanders.  “It’s a day when a bunch of skaters group up and have a little skate contest.”

Saunders could be seen shredding on the rails alongside his Dogtown crew of professional skaters at the Venice Beach Skatepark.

Venice Beach, known for its iconic views of the sand and waves mixed with a subculture beach market crowd, attracted hundreds of skateboarders both amatuer and professional who ground out the day along the bowls of the Venice Skate Park.

The Dogtown Skateboarding crew whose history was popularized in the movie The Lords Of Dogtown (2005) showed up en masse to the Go Skateboarding Day event held at the Venice Beach Skatepark.

Tyler Hendley, of Dogtown Skateboards, said he was thankful to be part of a solid skateboarding crew that has been given the opportunity to show off their tricks at the Venice Beach Skatepark on a daily basis.

“I’m very thankful and very luck to ride for Dogtown Skateboards,” said Hendley.  “It’s a pleasure to be on my skateboard today.”

Christian Sereika, another Dogtown skateboarder, could be seen doing multiple kickflips over the railing and landing them on the other side.

Sereika said he liked the way the Venice Beach Skatepark bowl gave him a solid boost over the railing so he could complete his trick.

“I kind of like jumping over stuff,” said Sereika.  “When I come to a skatepark, I just look for the first thing to jump over pretty much.  To me everyday is Go Skateboarding Day but today is the actual holiday.”

Joe Ligammari, a New York transplant to Venice Beach, said he was stoked to be skating at the same location where skateboarding started with the Z-Boys in the 1970’s.

“This is where skateboarding started,” said Ligammari. “I am skating with great friends and great skaters.  It’s a great day.”

The Z-Boys popularized the punk skater subculture with their aerial vertical skating moves that mimicked the moves of the local surfers in the area.

Yet Go Skateboarding Day at the Venice Beach Skateboard park attracted more then just the Dogtown boys as a few girls also showed up to show off their tricks.

Female skateboarder Cara Lawson said that it was exciting to be a girl surrounded by all the boys grinding and landing their tricks in and around the bowl.

“It’s pretty exciting being here today as I am one of the only girls here at the event,” said Lawson.

But the skating fever wasn’t just limited to Venice Beach and could be found kicked into high gear further inland at Stoner Park in Los Angeles that boasts a skatepark of its own.

12-year-old skateboarder Brandon Montes said that he liked having the Stoner Skatepark in the area because it offered him a positive way to spend the day with his friends.

“I like the skatepark because it keeps us kids out of trouble,” said Montes.  “Around here we really needed a skatepark, so people who live around here can just come here and skate and have fun.”

Ten-year-old skateboarder Patrick Cannon said that Stoner Park was a great place for children and adults.

“I think it’s a great place for kids and grown ups because here you don’t get kicked out when you are skateboarding,” said Cannon.  “I think that’s why they built it in the first place.”