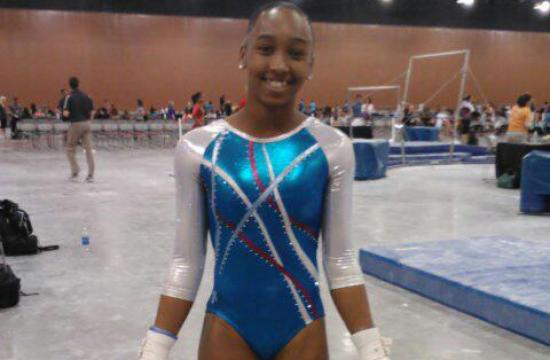 15-year-old Cydney Kone, a level 10 gymnast on the Broadway Gymnastics School team and a sophomore at Santa Monica High School, is actively planning her future by training for a promising career in gymnastics.

Kone said that her goal is to one day compete in the Olympics and is already en route with her recent bronze win at the Region I Championships held April 12-14 in Phoenix, AZ.

“My goals in gymnastics are to compete for Stanford University, and or go to the Olympics,” said Kone.

Kone said that she has had success in gymnastics because of her ambition and commitment to the sport while adhering to the mantra “no pain no gain.”

“Gymnastics taught me to love and always be in control of what I do,” said Kone. “It has helped me in life because it taught me to never give up and to have perseverance, discipline, self confidence, and teamwork.”

During Kone’s freshman year of high school, she qualified for Western Nationals and has accumulated over 200 medals in gymnastics since she started competing eight years ago.

Kone said that she has a specific routine that she follows when preparing for upcoming competitions.

“When preparing for competitions, I do routines consistently over and over again,” said Kone. “I get lots of rest so that I have energy and I eat very healthy.”

Although Kone has suffered from multiple injuries in her past 2 seasons, her injuries have only pushed her to become a better athlete.

“If you’ve never fallen down, then how will you know what getting up is like,” said Kone.

The success Kone has had in gymnastics, she said she was from listening to the advice of her coaches and working hard to achieve her goals.

“My coaches make me train quality work, not quantity; because of injuries,” said Kone. “I have had many injuries from two precursors to stress fractures in both knees, to a severe neck sprain but even after all of that I am still committed. And I work even harder to succeed.”

Kone is part of the Broadway Gymnastic School’s girls team that includes top gymnasts from the Westside region who recently competed in the Level 9 Western Championships in Roseville, CA May 2-5, 2013.

The team includes Caroline Spertus of Brentwood who won the silver on the balance beam at the Region I Championships in Arizona alongside Kone and Thea Obrist of West Los Angeles who won the gold on the uneven bars.

At the Level 7 Region I Championships held on April 26-27 in Nevada, teammate Remi Godinez of Brentwood who placed second on the balance beam.

Kone said that she believes that the strong competition she practices with as well as those she competes against has challenged her not to give up on her dreams and this has led her to climb up the ladder in the world of gymnastics.

“(Competing) makes me feel like all my work has paid off,” said Kone. ” I feel wonderful, and full of excitement but mostly I am proud of myself and proud to have been given the chance to compete.”