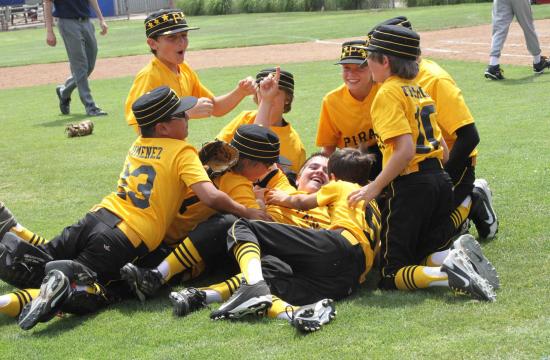 In the first inning, the Orioles looked to make something happen starting the game off with a leadoff single by Eli Levy. The Orioles eventually loaded up the bases with one out. But Pirates pitcher Sam Brand regained his poise and struck out the next two hitters to get out of the inning without allowing a run.

The Pirates the responded with with singles by Grant Smith, Brand, Asher Burkin, and a double slapped by Charlie Gooding who received two RBI’s for his effort.

Brand came back to lead the Pirates in the bottom of the second by scoring five runs on four hits with doubles whacked by Smith and Bennett Kelly, and singles by Max McDoniel and Jack Hyde-White.

The Pirates added another run in the bottom of the fourth after a scoreless third inning. A fantastic double play by the Orioles first baseman Duncan Mugalian prevented the Pirates from increasing their lead.

The Orioles responded to make it a game by giving Pirates pitcher Brand trouble in the top of the fifth inning. Leadoff hitter Eli Levy singled followed by another strikeout by Brand and a single by Cody Rains. The Orioles John Blodgett then slapped a long ball into the outfield. A single by Paul Miller scored Blodgett, and the Orioles were back in the game 7-3.

The Pirates added another run in the bottom of the fifth inning with singles hit by Asher Burkin and Max McDoniel. The Orioles Paul Miller struck out the side despite allowing a run.

In the sixth inning, Pirates pitcher Smith relieved Brand who had only allowed three runs while striking out twelve. Naveen Bahadur singled to lead off the sixth inning. The Orioles Blake Benun then hit a screaming line drive to short that was snagged by Brand. That was followed by a groundout to first base and then Levy singled for the third time in the game on a 0-2 pitch to keep the Orioles alive. The Orioles Mako Watanabe then singled to the right of second base scoring Bahadur.

The ball got past the right fielder and was retrieved at the fence by center fielder Asher Burkin who threw the ball to shortstop Brand who relayed the ball to catcher Bennett Kelly to tag out Levy as he was attempting to score to end the game.