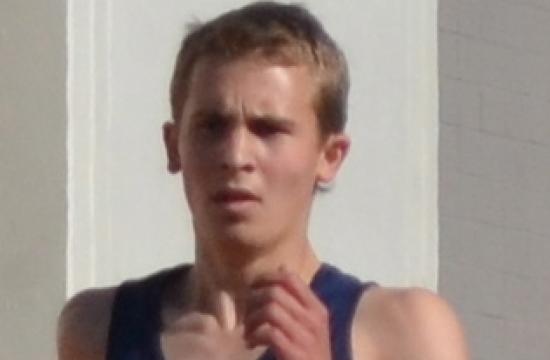 Samohi Cross Country runner Justin Sardo recently won the Jim Staunton Champion for Character Award which recognizes student-athletes, coaches, administrators, schools, officials, and members of the media who best exemplify the virtues of sportsmanship and character among our member schools and our communities.

Sardo, a junior at Samohi, said that being a runner has helped him to find balance in his life.

“Running allows me to find myself, and that sort of permeates into my studies and into all aspects of my life,” said Sardo.

Sardo said that his high level of academics, athleticism, and community service qualified him to win the award.

“Basically, the award recognizes integrity and character in high school sports as well as academics,” said Sardo.  “”In applying for the award, I had to submit a brag sheet and a letter of recommendation which I got from Coach (Tanya) Fischer.”

The Jim Staunton award is offered to any student/athlete in the CIF Southern Section – a section made up of around 600 schools- and about ten kids are selected, along with several coaches and administrators and media personnel.

Sardo said that there were a few things about himself that made him stand out from the other candidates for the award.

“I started a charity at the high school called Pocket Change,” said Sardo.  “Pocket Change is an on-campus student-led organization that converts students’ simple change into change for the community. Pocket Change utilizes five donation boxes set up around the high school campus to collect money in the form of pennies, nickels, dimes, and quarters, and pools that said money at the end of each month to give to a previously selected, local non-profit organization.”

In its first month, Pocket Change raised $112 in student donations which then was donated to the Ocean Park Community Center to help provide relief for local homeless citizens.

During the second month, $103 was collected for Step Up on Second which is another local organization that serves to support mentally-ill individuals.

Sardo said that he has been raising money for charities since he was in middle school.

“I’ve been raising money for a favorite charity of mine called Charity:Water since middle school,” said Sardo.

Charity:Water is a non-profit organization bringing clean water to people in developing countries through building sustainable wells and has partnered in the past with humanitarian relief organization World Vision.

Charity:Water has funded more than 8,217 water projects in 20 different countries, and has given 3,200,000 people the most basic necessity of life.

Sardo said that he was inspired to raise money for Charity:Water after attending a presentation by the organization.

“I attended a presentation by Charity:Water’s founder in middle-school, and decided to institute school-wide campaigns to bring awareness to the water crisis and help fund wells in Ethiopia,” said Sardo.   “I’ve continued to fund raise through high school, giving up birthday and Christmas gifts to support those in need, and have thus far raised/donated $3,184 for the organization.”

Sardo said that he has also has donated his time to launch sports organizations to help youth athletes in Santa Monica get involved with athletics.

“On the athletic side, I have created the Santa Monica Youth Running Club,” said Sardo.

The Santa Monica Youth Running Club (SMYRC) is an organization started last summer by Sardo and fellow teammate Arden Lassalle.  The organization offers accessible running coaching to kids ranging from ages 8-15. Sardo said that he has developed into an athletic coach while still in high school.

“Over the course of [last] summer I coached 10 elementary- and middle-schoolers,” said Sardo.  “By summer’s end, kids who had, prior to signing up, only run a single mile at a one time were able to run distances of up to 5 miles in a given session, along with participating in strength training and drills, and, receiving instruction in running form and stretches.”

Sardo said that the goal of SMYRC is to get kids active and to build a solid foundation in running and he is committed to helping youth achieve this goal.

“I will be heading the program again this summer, and additionally, have been private coaching through the year,” said Sardo. “As with my coaching for the Santa Monica Youth Running Club, I run with clients, advising them about stretches and drills, and devising workout plans ranging from long runs tointerval workouts to strength training.”

“I don’t play a musical instrument anymore, but I was the principal bassoonist of the top band and orchestra at my school and have participated in various prestigious honor orchestras,” said Sardo.

Sardo was selected by the Southern California School Band and Orchestra Association to be one of three bassoonists in the nation to take part in the National High School Honor Orchestra in Georgia as a sophomore in 2012.

Sardo is also a scholar holding a straight A average but said that he attributes his work ethic to the coaches and other athletes he has ran with on the Samohi Track and Field team.

“Track and cross-country have had a huge impact on my life,” said Sardo. “I used to be a musician and a tennis player but I’ve just always enjoyed running, and eventually decided that I really wanted to pursue it. I think that this sport in  particular helps (me) find a strength that I never knew I had and  really gives me the confidence that I need to accomplish and overcome anything in my life.”