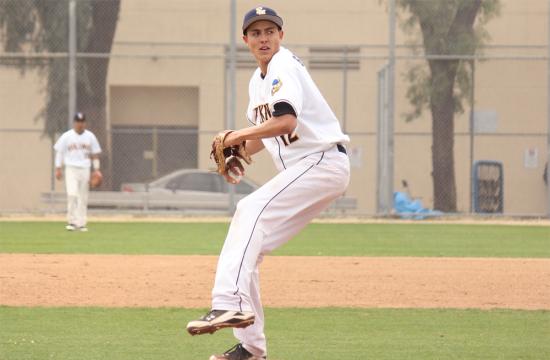 Santa Monica High School’s star-pitcher Conner Greene signed a minor league contract with the Toronto Blue Jays after being drafted in the 7th round, 205th overall, in the MLB First Year-Player Draft.

“It was very exciting signing my first contract,” said Greene. “My goal now is to get bigger, better, stronger and move out of rookie ball by the end of the year.”

The 6’3-165 pound right-hander has been assigned to Toronto’s Advance A Affiliate minor league team, named the Dunedin Blue Jays, which is located in Florida.

Greene will be joining a Dunedin team that is currently in first place of the North Division in the Florida State League.

He is expected to make his first appearance with the team in the upcoming weeks, but will pitch in an inter-squad game in the next couple days.

Greene has been scouted to have a plus fastball, which will top-off in the mid 90’s. His splitter and curveball are the two secondary pitches that he will need to control and master as he works his way through the minor leagues.

Scouts say that if Greene can command his fastball, his secondary pitches will be even more effective allowing him to continue to baffle hitters at the major league level.

The Toronto Blue Jays has been an organization that has been pitch-starved for the past several years with plenty of their key pitchers finding themselves on the disabled list. If Greene can keep himself healthy and continue to grow into his body frame, he may prove to be a key part of a young group of pitchers that the Blue Jays are grooming to play in the majors the next couple of years.

Greene received an undisclosed signing bonus when signing his contract with the Blue Jays.