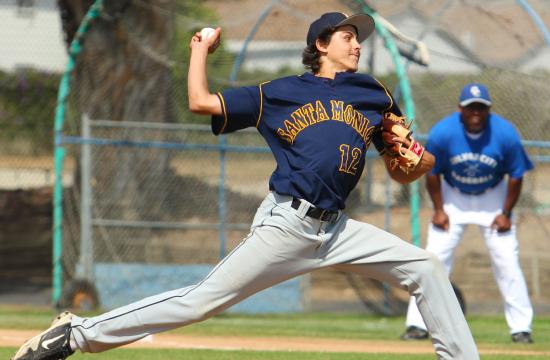 Santa Monica High School’s 6’3″ 170 pound right-handed pitcher Connor Greene is expected to be drafted in the Major League Baseball Amateur Draft that will start June 6 and continue until June 8 after pitching two years on varsity for the Vikings.

Greene said that he expects to hear his name called between the sixth and tenth rounds of the upcoming MLB draft.

​“Last year was the year that I just started to get publicity, so I was still somewhat under the radar,” said Greene. “This year the pressure was on me to perform and I usually thrive under pressure. I think overall it turned out well, because as a pitcher you try to repeat your motion over and over and I felt like I did that throughout the season.”

Greene’s numbers were good and he exited the 2013 holding a solid 1.68 ERA with 76 strikeouts in 50 innings pitched to cap off his senior year season at Samohi and make him the most dominate pitcher in the Ocean League.

Under his leadership, the Vikings posted a 20-11 overall record in the 2013 season and went undefeated in the Ocean League going 10-0.

Greene had pressure to perform well as a senior after a memorable junior season and he took this as a chance to thrive and prove that all the hype was well deserved.​​

Greene said he would be thrilled to hear the royal blue of the Dodgers calling his name on draft day, but says he will be pleased getting drafted by any ball club and just looks forward to making a team’s 40-man roster.

​“Being a professional ballplayer has always been my dream, but making a 40-man roster is the ultimate goal,” said Greene. “Hopefully, I’m given a fair enough offer where I can finally achieve my dream and go out there and play baseball.”

​Greene said that he hopes he will be allowed to bat in the majors as well as pitch.

​“I’d like to be able to hit for myself,” said Greene. “I don’t want to be known only as just a great pitcher, but also as an above average hitter.”

With the draft rapidly approaching, Greene plans to continue working out and increase his strength so that he will be ready for the new challenges that will await him in the minor leagues.

And despite Samohi’s disappointing first round loss in the 2013 CIF playoffs, the Vikings baseball team can be proud that it has produced a talented top prospect pitcher and paved the way for Greene’s soon-to-be professional baseball career.