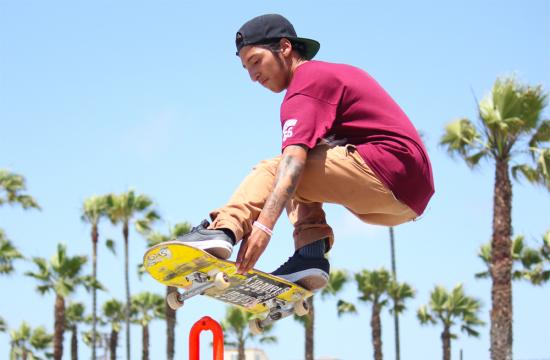 The annual Go Skateboarding Day at the Venice Skatepark in Venice Beach is expected to attract over 500 professional and amateur skateboarders who will flip tricks and grind away for the ninth year in a row Friday afternoon.

June 21 has been labeled around the world as the official day for skateboarders to usher in the summer by riding on their skateboards all day.

One of the non-local skaters attracted to the event was visiting Vermont skater Matt Houran who said that his experience at the Venice Beach Skatepark Wednesday afternoon was an experience that he would never forget.

“It’s amazing here,” said Houran.  “This is probably the best skate park I have ever been to coming from the east coast.”

Houran said that he heard about the skating event out in California and that was why he was visiting Venice Beach.

“I heard about this event in California where there was this designated day where everybody was supposed to go out and skate all day,” said Houran.  “A lot of places do this.  It is kind of a skaters holiday.”

“I’m stoked to be part of this event because its cool to bring skateboarders together to be creative,” said Correa.  “It gives us the opportunity to express ourselves with skate sabotage.”

Correa said that he enjoys the Venice Beach Skatepark more then other skateparks in the Los Angeles and Westside neighborhoods.

“The thing that makes it cool to skate here is because it is right next to the beach,” said Correa.  “You get more fresh air then you get then if you were downtown.  For some reason I tend to last out here longer then I normally would at other skate parks.”

Nyjah Imani Huston, an American professional street skateboarder, was the overall champion at the Street League Skateboarding competition series in August of 2012, and is just one of the many professional skateboarders expected to participate in the highly anticipated event.

Festivities that feature autograph signings, live music, cash for tricks, and giveaways will be at the Venice Beach Skatepark event sponsored by the world famous KROQ’s ROQ n Surf series.

Skaters will begin performing tricks starting at noon and lasting until 3 pm.

For more information on the event, visit www.veniceskatepark.com