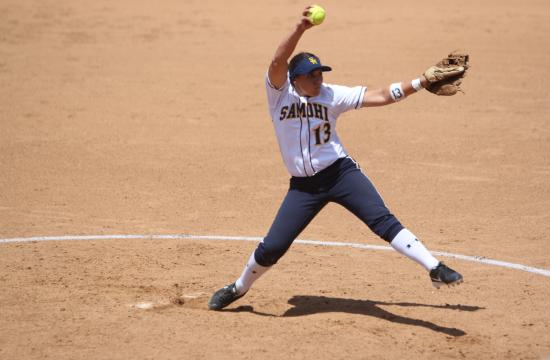 Samohi’s Annie Quinn scored the Vikings first run of the game after slapping a triple before being batted in to make the game 1-0 while Vikings starting pitcher Whitney Jones held her ground in the first two innings to keep the Vikings in the lead.

But in the third inning, the Bulldogs unleashed their offense and rounded the bases racking up seven runs off of eight hits.

Samohi responded when Sara Garcia hit a home run in the bottom of the third inning to bring the Vikings within five runs at 7-2.

The Vikings Carly Condon capitalized on the momentum shift hitting a double soon after, but that was all the damage Samohi could muster in the inning.

Garcia was moved from shortstop to pitcher relieving Jones in the fourth inning, but the onslaught from the Hemet offense was not to be denied and more runs trickled in.

In the sixth inning, the Bulldogs went on another rampage biting off another huge cluster of runs eliminating any chance of a Vikings comeback and sealing the win.

With the loss, the Vikings lay claim to second place in CIF Division IV after a highly successful 2013 softball season .