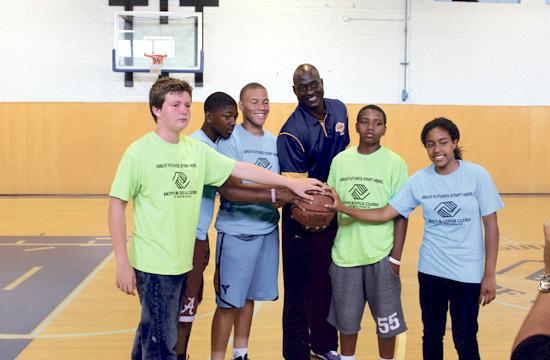 Michael Cooper, retired Los Angeles Lakers player and former coach of the NBA and WBNA, visited the Boys and Girls Club of Santa Monica on Monday.

A former legendary player, Cooper was most recently the head coach of the University of Southern California women’s basketball team.

Cooper’s visit to the club was part of a fundraiser at Santa Monica’s 35th Annual Auction and Dinner.

The visit, which entailed Cooper playing basketball with club youth in a game of “horse,” was part of a donation from a generous supporter of the club.

Cooper decided to auction off his time as a means of supporting the organization.

The auction bidder, who won the game of “horse” with Cooper, selflessly donated it back to club, for the enjoyment of the program’s youth.

Founded in 1944, the Boys and Girls Clubs of Santa Monica currently serves close to 8,000 youth through memberships and community outreach.

The goal of the club is to serve children from all backgrounds, regardless of economic circumstances.

In this way, the Club seeks to provide a safe and nurturing environment for youth ages six to 18 to develop socially, succeed in school, and to stay physically active.

As an alumnus of the Boys and Girls Club, Cooper has been an avid supporter of local clubs for years.

“I had an opportunity to grow up as a young person in Pasadena, but the streets were not the place for us to be,” Cooper said. “Our parents sent us to the Boys and Girls Club, where I learned a lot of leadership, sportsmanship, and respectfulness.”

Cooper said he was thankful to have learned such important qualities in the kind of setting that the club offered.

Despite his experience with professional athletes, Cooper was excited to work with youth.

“I sometimes think of myself as just a big kid, so I enjoy working with young people,” Cooper said. “Youth can be thought of as a blank slate in a sense, as you can imprint them to help them in their lives.”

Cooper realizes that when he works with kids, he has a tremendous opportunity to be a role model.

“I have kids myself, so I always want to set a great example for young people to follow,” he said.

Cooper certainly set an excellent example on Monday when he explained his philosophy to the program’s youth.

His Five D’s are simple, but according to Cooper, are essential to achieve success. “Determination, dedication, desire, discipline, and decision making, are five things I still live by today and will live by until the day I die,” Cooper said.

To learn more about the Boys and Girls Club of Santa Monica, visit smbgc.org.