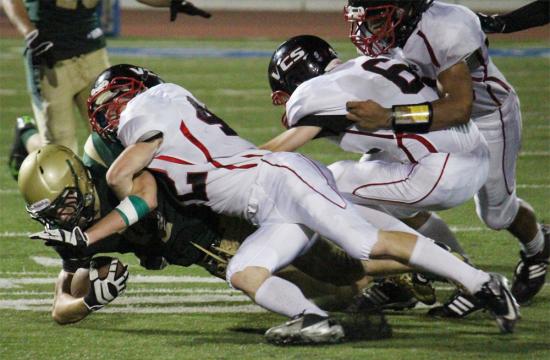 Early in the second quarter St. Monica running back Jason Thomas had already scored his third touchdown of the game against Village Christian, but the Crusaders bounced back and pulled to within one touchdown at 29-21 by halftime at home Friday night.

By the end of the game the score was 50-36 and the Crusaders were on top stopping Thomas in his tracks before he had a chance to gain yardage.

“You score four rushing touchdowns and a special teams touchdown to get 36 points and then give up 50 points is just not acceptable,” said Guerra.  “Our defensive backs and linebackers have a lot of work to do.”

Many mistakes made by the St. Monica football team turned into big plays for Village Christian starting with an accidental Mariners touch on a punt in the second quarter.   It was followed by a good number of face mask penalties and a running into a kicker penalty that put Village Christian in prime position to score time and time again.

Guerra said that the running into the kicker penalty happened after the Crusaders snap went awry on a punt.  Guerra did not agree with the call on the field.

“It was a botched snap and our guy slowed up to go for the punt,” said Guerra.  “I think it was a pretty good acting job by their punter.”

Yet even with the loss there were a number of players who stepped up on offense during the game namely running back Thomas and wide receiver Jack Cain.

Guerra said that he was happy with the performance of wide receiver Cain during the off season and during the first game of the season even though the Mariners lost.

“Jack was a role player last year as a junior and he had a tremendous off season,” said Guerra.   “He is a great leader who practices hard and is a good example of what happens when you work hard and stick with it.”

Thomas on the other hand had scored his third rushing touchdown off of a two yard dive after a 52 yard reception early in the second quarter made by Mariners wide receiver Cain.

Guerra said that Thomas has improved dramatically since the 2012 football season and attributes his success to hard work put in the off season and in the weight room.

“He has worked hard since he was a freshman and last year he was third string guy running a lot of scout teams but he’s hit the weight room,” said Guerra.  “Tonight he had a good running game and scored four touchdowns.”

Guerra said he was not happy with the outcome of the game.

“Clearly we can score,” said Guerra.  “But we got a sophomore quarterback (Cameron Nuslein) who was put under pressure back there.”

By the fourth quarter, the offense of Village Christian looked unstoppable and seemed to score touchdowns at will.

“The bottom line is that we gave up three touchdown passes and we are playing a defense that is designed not to do that,” said Guerra.  “When you are playing cover three, you cannot give up three deep touchdowns.”

Next game for St. Monica is away against Malibu High School Friday, Sept. 6.